A Response To The 21 Christians Beheaded in Libya 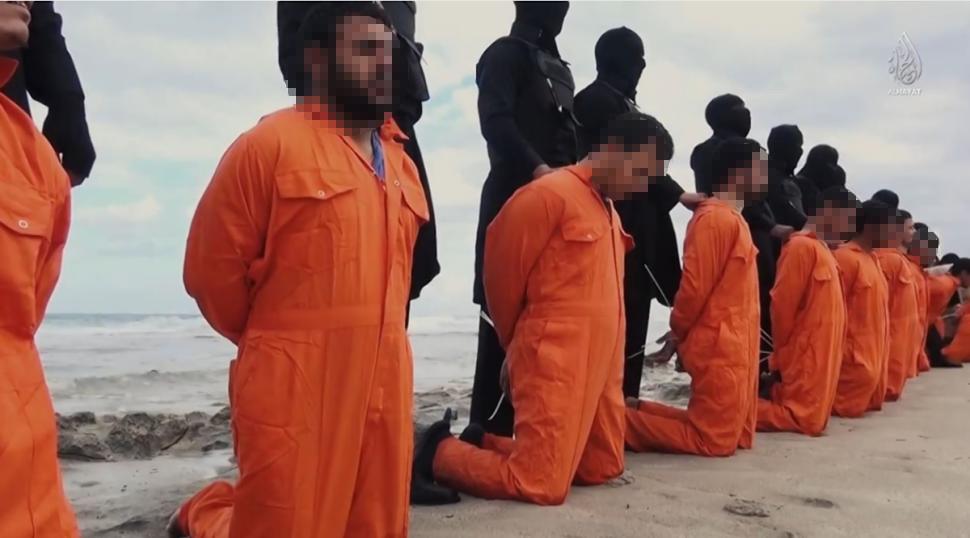 A friend of mine forwarded the recently posted video of the Islamic State militants beheading 21 Christians in Libya this afternoon. I am horrified, angered and saddened. This was a misguided, heinous act perpetrated by violent, evil men, and it tears at my heart.

I haven’t watched other beheading videos, mainly because I don’t think they do anyone any good to watch. We are so accustomed to watching people die on television, that the lines between reality and fiction get very blurred. I don’t encourage you to watch it, but I do want you to carefully consider it.

I am writing about this today as it weighs heavy on my heart, but what Christians must take away from it will be a lesson for years to come.

The feeling most Americans have had to the videos of beheadings and killings lately is outrage. There are people calling for us to go and kill these wicked men for their murders. While I believe that these men should encounter justice, I must temper my outrage.

There was something very different on the faces of these beautiful Christians as they faced their deaths. I have seen the faces of the other men recently beheaded moments before their death, and there is anguish and fear. These Christian men, however, had no visible anguish. They had no fear. They prayed. They seemed restful in what should have been the most stressful moment of their lives.

They did not seem to fear the horrible death that was about to come to them for no other reason than being Christians who had fled Egypt into Libya.

I have been pondering it for some time now because of the Islamists’ chosen method of dispatch, but I could no longer overcome the reality of what we are facing today because of these poor men’s deaths. I have been thinking about how we are told in Revelation 20 that Christians will be beheaded for their faith in Jesus, and for refusing to worship the beast.

I saw thrones on which were seated those who had been given authority to judge. And I saw the souls of those who had been beheaded because of their testimony about Jesus and because of the word of God. They had not worshiped the beast or its image and had not received its mark on their foreheads or their hands. They came to life and reigned with Christ a thousand years.

I am not saying that we are in the great tribulation currently, but I do believe that the message of Revelation is one every believer should be well-versed in, no matter your view on when the end-times will begin, and who will go where, when. Revelation offers us a look at why we as believers are more than our flesh and blood, why we are more than the temporal versions of what we will forever be.

The look on these men’s faces seemed to betray what they knew. They were about to pass from temporal pain and struggle into eternal glory and honor. No, they had not endured the Great Tribulation of the book of Revelation, but they had endured the Great Tribulation of their own lives. It doesn’t get any worse than dying—it can only happen once. They had suffered, but Jesus promises them that “He will wipe every tear from their eyes. There will be no more death, mourning or crying or pain,” (Revelation 21:4)

But their reaction doesn’t change ours. We are often cold to the reality they have faced, because we don’t know how to deal with our emotions. They were able to enter eternity with peace in their hearts, but we are angry. We are outraged. We border on hatred.

And Jesus understands that. It is natural. It is the appropriate response to horrible injustices. He understands something else about us, and that is we cannot hold on to that anger, outrage and hatred.

It is mine to avenge; I will repay. In due time their foot will slip; their day of disaster is near and their doom rushes upon them.

The key phrase here is “in due time.” If God avenged evil at the moment of its occurrence, none of us would be alive. No, God gives us time. He is patient, even when it means that we perpetrate evil. He gives us time to repent and accept His redemption that brings us back to God—redemption that required His own blood to complete.

We are horrible judges of what is and is not just. When it comes to justice, generally we cannot see past the end of our own noses. Even when it is clear to all, we are horribly misguided in our execution of it. That is why God says He reserves vengeance for Himself.

But Jesus knows that we struggle with it. It is not sinful to long for vengeance. It is not wrong to seek vindication. It is sin when we take it into our own hands. Consider the request of these saints who had been killed in Revelation and now stand in the presence of God Himself:

How long, Sovereign Lord, holy and true, until you judge the inhabitants of the earth and avenge our blood?

The book of Revelation is mostly about God exacting this justice, this vindication, on behalf of His saints. It is not about a misguided, wrathful God trying to destroy people who never saw it coming, but about a loving God who cannot hold back from giving justice to the ones who stayed true to His name in the face of death.

I am angry, and I need to surrender my will to Jesus, because He will one day avenge these mens’ blood. It may be next month, or more likely it may be when the end times do come, but either way He will cause someone to pay. And it is that anger that I must temper, because what I need the most is to see like Stephen did—the one who asked, like Jesus, to forgive his assailants because they didn’t understand.

You see, these men’s justice will come in one of two ways. God will avenge their blood by taking their attackers’ lives and casting them into hell for an eternity of punishment, or He himself will bear the weight of their punishment through His shed blood.

Every single person, Islamic beheader or not, will face an eternal wrath of God in hell unless we accept the shed blood of Jesus. One day Jesus will stand up for us and enact His perfect vengeance on the wicked of this earth for their rejection of Him and treatment of us, but until that day comes, we have something even greater to ask for. We have the dignity to lay at Jesus’ feet our desire for vengeance and take up something much more valuable. We have the dignity to pray for their salvation.

I am not saying that these wicked men do not deserve death. They certainly do. But so do I, and instead I will receive eternal life. I cannot help but at the feet of Jesus see myself as lost and evil as these Islamists if it weren’t for His precious blood.

So feel your outrage. Get angry. Weep for these men. Cry for their wives and children. Then, after you have fully realized the depth of anger and desire for justice within you, lay it at Jesus’ feet. Give Him full permission to enact revenge, and pray for mercy.

Our Call To Pray

Pray for mercy on these wicked men. Pray for mercy for these Christians’ families, that they may not let this forever haunt them with anger and bitterness. Pray that this madness would stop. I pray that this won’t be the last beheading because of a war to eradicate the earth of these men, but that the Islamic world will see these Christian men’s faces and realize they all had something the Islamic world doesn’t.