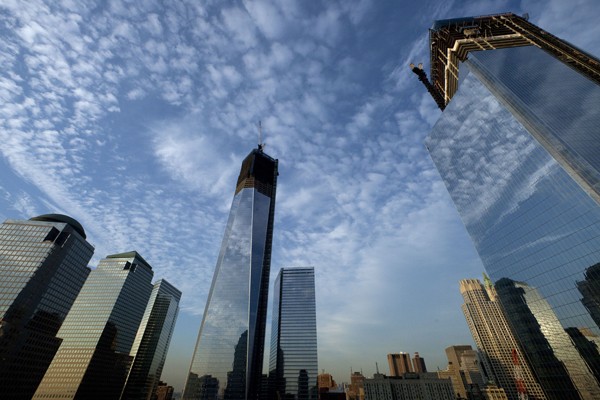 This may seem a little odd, and I pray I don’t regret posting this publicly, but I think I may have more regret for not posting it.  I had a dream in 2003 about 1 World Trade, the landmark building being built on the ground zero site to replace the towers.  It was formerly being called “freedom tower.”

First, let me say that it’s a dream I’ve really paid attention to these years because of the dream I had on September 9, 2001 where an angel showed me the twin towers (WTC 1 & 2) collapsing.  I’ve never been to New York before, so I don’t have first-hand knowledge of the site, but this weekend proved to be chilling to me because of what I saw on television and I feel I should share what the Lord showed me in the dream. The dream began with one new building being constructed on the site of the twin towers’ collapse.  That struck me because at the time (February 2003) all of the talk had been very patriotic like we should rebuild the two towers “brick-for-brick” as they were before.  So one building replacing the two didn’t make sense at the time.  But in the dream there was only one.  It was halfway done when the dream began.  I saw it from the outside and it was clad with mirrored glass with the structural steel extending up above.  I’m struck today because it looked in my dream exactly as it did yesterday on television.

The dream changed and now I was inside working on the construction with all of my Christian friends and family.  We had such a spirit of “for God and country” as we were building the tower.  We felt like we were doing the right thing rebuilding this patriotic landmark.

The dream changed again and now we were almost finished with the building.  I was on what seemed to be the top floor.  The glass cladding came up to about waist height and there was no fall protection.  I was there with several Christian family members and friends again.  We still had a patriotic spirit, but just then a faceless man walked in.  I immediately knew it was Satan.  I was so disturbed by his presence that I hunkered my butt down against the exterior wall that was waist height so that if he tried to toss me over the edge I’d see him coming to do it.  I didn’t want my back turned to him.

After I watched him for a while, the dream changed again and now the building was finished.  All my friends and I were being given a tour of the building, going one floor at a time using the stairwell to go from top to bottom.  As we got lower in the building, things started to go wrong.  It was getting darker, dingier and very nasty.  The building was leaking (from the plumbing) and there was disgusting green ooze dripping from the stairs down on to us as we descended the staircase.  It got worse the lower in the building we were.  Finally, as we neared the ground floor, it was almost impossible to dodge the nasty green water dripping down onto us.

Just then I opened the exterior door of the stairwell to the outside.  There was a large expanse with trees there and it was nighttime.  I looked back up at the building and it was very dark–it looked black now instead of the shiny reflective glass it had been during the day.  As I gazed up at the building my heart was sick.  I couldn’t believe that the building that so many believers had worked on had become something so vile.  The building just had an evil air about it as I was looking at it.

Then my attention was turned down the street.  I noticed that most of the businesses were either gay bars, strip joints or pornography stores.  I couldn’t believe my eyes!  I said out loud to myself, “it can’t be!”  I wondered how everything had gone so wrong from what had started out as such a patriotic landmark.  I was so struck by the street scene, I had to know if what I was seeing was real.  I walked into one of the gay bars just to see if it was true what I was seeing.  When I stepped inside it was the most vile thing I could have imagined.  Then I woke up.

When I woke up the Lord spoke to me, “That building will be a sign and a seal of My judgement over the United States.”  I was gripped by the seriousness of the Lord’s words.  I felt like the Lord was going to release His judgement over America when the building was finished.

Now, to be clear, let me say some things about this.  First, I don’t think that the attack on the twin towers in 2001 was at all justified, nor was it the Lord.  In my first dream about that collapse, I felt the Lord’s agony over the events.  I don’t believe the Lord did it, but I believe He allowed it because He had purpose in the outcome over these years since. Rendering of the finished tower

Second, I don’t think rebuilding the building in itself is bad.  There’s no doubt that the buildings had to be replaced by something, if for no other reason than to simply replace the square footage of office space lost.  The Lord is not saying that rebuilding the tower was wrong.  What was wrong was that myself and all my Christian friends were so sure we were doing what was right we didn’t consult the Lord on His thoughts on the matter.  We were blinded to the terrible evil that was going on all around us because we were distracted by our patriotic endeavors.

The implication I felt I received from the Lord–the reason for judgement–was what was on the street, not necessarily the tower.  I felt like God was going to judge America for the immorality that has run rampant.  And I don’t think the Lord is going to judge us because we have gay people and strip joints.  I believe the Lord will judge us because His people, the church, has been quiet and complicit with the immorality that has taken hold of us.  I fully believe that if the church would stand up and declare righteously that we must be free from such things, the Lord would relent.  But I think it’s clear that hasn’t happened yet.  It seems that the Christian leaders who’ve preached the loudest in recent years against immorality have led the most immoral secret lives.

The church has become distracted by so many things that calling the world to repent from sin and turn to Jesus is almost not on our lips at all anymore.  And I believe my dream is being fulfilled before our eyes.

Last year I saw a clip from the Glen Beck program about the mosque that was going to be built near ground zero.  He had a self-professed Christian on the program who said he was going to open a gay bar at ground zero, right across from the mosque, just to spite those muslims.  Glen Beck thought it was a funny idea too.  That broke my heart that a professing Christian could be so blind to the real evil in our nation.  Islam is not why America will be judged, but because God’s people have turned away from the Lord.

One last thought: last month the Lord shook Washington DC with the largest earthquake ever recorded there.  There wasn’t really any damage to speak of, though.  Except for one place.  It wasn’t the White House, the Capitol or the Pentagon.  Only the Washington Monument had what appeared to be one brick that cracked near the top.  No, the one building that truly suffered was the National Cathedral; the symbol of Christianity in America.  Three of the four spires atop the main tower were broken off.  Coincidence?  I don’t think so.

People of God: our nation’s greatest enemy is not from without, but from within.  We may be at war with Islamic extremists, but we’ve been told not to fear the one who can destroy the body, but the one who can send us to hell (Matthew 10:28).  Our greatest enemy is our own sinfulness.  The Lord has already begun judging us for it–we are embroiled in multiple foreign wars, our economy is disintegrating and natural disasters are increasing in intensity.  And the solution is repentance.  Not from the world, but from the church.

When I shut up heaven and there is no rain, or command the locusts to devour the land, or send pestilence among My people, if My people who are called by My name will humble themselves, and pray and seek My face, and turn from their wicked ways, then I will hear from heaven, and will forgive their sin and heal their land. 2 Chronicles 7:13-14

As a footnote, I was shocked a year or two ago when I saw this.  It is a time lapse of day turning to night at 1WTC.  It shows the mirrored glass turning dark at night, which makes sense.  Reflective glass with reflect what it’s given, so at night, if the interior lights are off, the building will look black.

Glen Beck video here.  It’s just a joke to them.  This is the distraction that the enemy is using against us to blind our eyes from our real problems.  And I apologize for the course joking nature of this video segment–I’m linking it here so you can see what I saw, not for a laugh.