As Far As The East Is From The West 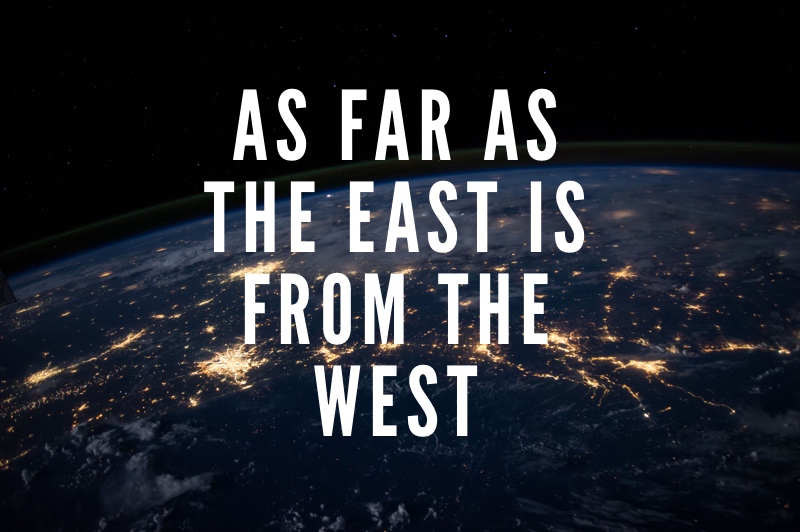 I was meditating on David’s words in 2 Samuel 22 and 23 as I was writing for my next 10 Week Bible Study. I was struck by just how surely David saw himself as clean and righteous. He knew he was pure before the Lord, even though we have such an exhaustive witness in 1 and 2 Samuel to the contrary.

David was a man who knew how to sin, and how to sin big. But even greater than David’s ability to sin was his knowledge and surety that there was a God who forgave extravagantly. David understood that through his repentance, God made him a completely new creation.

David trusted in God’s faithfulness to forgive our sins, like he says in Psalm 103.

as far as the east is from the west,

so far has he removed our transgressions from us.

The apostle John continued this same theme by saying this:

If we confess our sins, he is faithful and just and will forgive us our sins and purify us from all unrighteousness.

In 2 Samuel 22 and 23, David repeatedly speaks of himself as clean and pure. He claims that there is no sin in him and that all his life he has lived righteously. How is that? Because he knew that through repentance God would forgive and forget all his sins.

David’s confidence in his forgiveness caused him to live differently, but it’s the way God wants us to live today. We can be free from the bondages of sin and death if we will fully embrace God’s forgiveness and grace through repentance.

Yes, repentance often looks like making amends with the ones we have wronged, but when we trust God that He has forgiven and forgotten, we can take on that same freedom of spirit to no longer live under the burden of guilt and shame.