Freedom of Religion No More 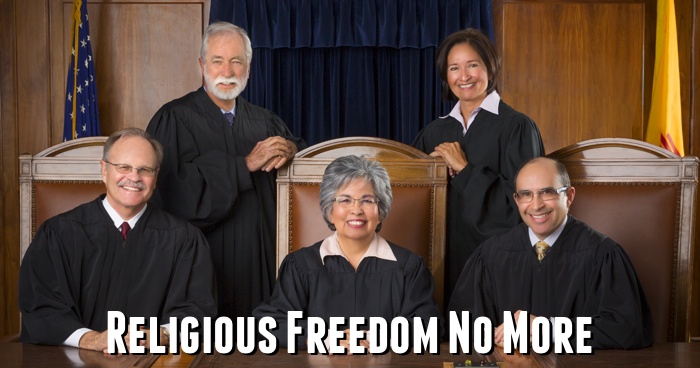 That’s a term that almost every American is familiar with. Many believe that it appears in the Constitution, but it does not. It is a colloquial term derived from the First Amendment to the Constitution, which reads like this:

Congress shall make no law respecting an establishment of religion, or prohibiting the free exercise thereof; or abridging the freedom of speech, or of the press; or the right of the people peaceably to assemble, and to petition the Government for a redress of grievances.

This has been one of the most challenged, most cited and most used clauses of the Constitution in our nation’s existence. The supreme court of the United States has faced this issue time and again. Every time the outcome has been a bit different, but the courts have always tended to err on the side of caution not to abridge “religious freedom.”

But we have begun to see a rapidly changing trend in recent months. The trend started a long time ago, but it has found a voice in the locomotive-powered term, “freedom of worship.” Notice the difference between that and the first phrase. To most Americans, it sounds the same, but they are worlds apart. Let me explain.

The New Mexico Supreme Court this week ruled that an Albuquerque photography did not have the right to deny services to a lesbian couple wanting their wedding photographed back in 2006. Their decision was an upholding of a lower court’s decision (meaning two courts saw it the same way!). In the ruling, the majority opinion (the decision was unanimous) said that the photographer’s refusal to shoot a wedding against her religious beliefs “provokes reflection on what this nation is all about.” The refusal, “no matter how religiously inspired, was an affront to the legal rights of that couple,”

Justice Bosson wrote that this was “the price of citizenship.” In essence, what the (New Mexico) court has said is that the photographer did not have freedom of religion, but freedom of worship. The photographer is free to worship however she pleases on Sunday, or any other day, so long as that worship and her convictions remain inside her chosen place of worship. When she entered the “public” arena of a private business, however, her religious beliefs must take a back seat to the rights of others.

That makes perfect sense if a Muslim Jihadist said that it is his religious right as a jihadist to murder infidels. Certainly his religious freedom does not cross into the right to murder, but the New Mexican Supreme Court’s decision flies in the face of the spirit of the First Amendment.

More and more people in Washington and around the nation are using the term “freedom of worship” to convey just such an idea. “Leave your religion at the church door” is the predominant thinking amongst the courts and beaureocratic administrators today. The Department of Health and Human Services issued mandates last year that required companies to supply abortofacient birth control to their employees as part of the Affordable Care Act. Companies like Hobby Lobby have faced monumental fines for disobedience because the government cannot see any clear reason why the company has a right to religious freedom in the marketplace. It is the idea that they may worship however they choose, but they are not free to run their business with such convictions.

Why Does This Matter?

In the grand scheme of things, Christians cannot be too aghast at such developments. We have seen the moral decay of our nation for decades and this is just the natural outflow of such changes. American Christians have experienced more religious freedom than almost any other people in history, something we should be grateful for. Sadly, it seems like we have lost our voice in this nation’s direction. In the dream I had in March of 2003, as I describe in my book The Year of the Lord’s Favor, the Lord showed me how American Christians would suffer a betrayal because we had not consulted the Lord in our actions. I knew that betrayal would become real at some point in the future, and I believe it has begun over the past couple years in earnest. I have a strong conviction that feeling of betrayal will continue to advance at an accelerated pace, as demonstrated by things like this case.

I have also said that the “gay agenda” is not what is destroying our nation, but it is merely the evidence that we have lost the culture and that our nation has turned away from the Lord. Cases like this one in New Mexico clearly demonstrate this. All this can be very discouraging to Christians and it looks as though our future is very bleak. The tide has changed an it is now rolling against us.

What Can We Do?

We can never let our depression over these changes overwhelm us. We, as Christians, must remember that our citizenship is in God’s Kingdom before America. We currently have a foot in both, which makes being an American important, but our eternity lies with God. So what is a Christian to do in times like these? Our God has answers for that.

This verse has become the de facto rally call amongst Christians in the last year, and for good reason. Our solution does not lie within our courts. It does not lie in legislation. it will not even be found in the right politicians. Our solution lies with God and God alone. When God’s people, the church, repent of OUR wickedness, OUR involvement in the sin that has led America astray, OUR complicity with injustice and evil, then God will hear our prayers. In fact, God will hear our humble prayers and heal the entire nation on our behalf.

Praying for the right politicians is good and Biblical. Praying for appropriate legislation is important. In fact, there are many great things we can pray for and act upon, but our first priority right now should be to ask God to forgive us and heal our land.

And if we will do what He asks in 2 Chronicles 7:14, He will surely heal us. Let’s all pray together that God will heal our land and give us true freedom of religion.