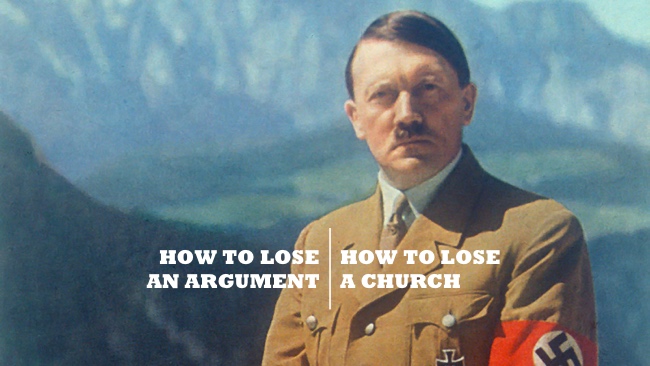 How To Lose An Argument

They say as soon as you invoke Hitler, you have immediately lost an argument, so I will go ahead and concede this argument from the beginning. Now, to invoke Hitler for those of you still interested in reading:

My son has been devouring a book series called “I Survived the…” It includes titles like I Survived the 2011 Japanese Tsunami, I Survived Pompeii and I Survived The Holocaust. As he was reading about the horrors of Nazi Germany and Hitler himself, my son asked me, “Daddy, why did the Germans choose Hitler to lead them?”

As I thought about my answer for a moment, something hit me. There was a lot going on both on the surface and unseen in Germany before WWII. It all led to a tragic ethnic cleansing by man and a similar cleansing by Jesus Himself.

Promises In Exchange For Power

I told my son that because of the anger and resentment toward Germany for The Great War (WWI), Europe had chosen to punish Germany which had led them to a state of desperate poverty. I told him that Hitler promised the German people a path to prosperity and power again, and the populous was willing to accept him because of the promises he made. I told him that not only did Hitler promise prosperity, he was able to deliver it.

One of the things that Hitler used to lay hold of his peoples’ hearts was to create a scapegoat in the Jews. They were predominately wealthier than the average German and they were foreigners (as in, not German, even though some had been in Germany for centuries). I told him that blaming our problems on others makes it easier for us to overlook our own faults. It worked well for Hitler because he was able to tap into a demonic anti-Semitism that already existed in Europe for centuries and tie it to German prosperity.

What Hitler found was a place to make economic promises devoid of any moral foundation.

Calm Down, I’m Not Calling Anyone Hitler

As with every geopolitical movement, it is certainly more complicated than that, but if you were to boil it all down, my answer to my son is pretty close to reality. Hitler returned the Germans to great prosperity very quickly. With it came one of the most vile, heinous wrongs the world has ever seen. Six million Jews were murdered so that Germans could confiscate their stuff.

Before you completely tune me out, I am not calling Donald Trump or Hillary Clinton Hitler. Not at all. What I will say is that the American people have long been promised a better economy by presidential candidates and the populous eats it up hook, line and sinker. They very rarely are able to deliver on their promises, although some have been better than others.

What is chillingly changing in our current context is that in just the past few years we have seen a complete abandonment to morals by both parties. If candidates are able to promise voters prosperity with no moral or ethical entanglements, history tells us that trouble soon follows. I pray we are not there yet, but I can tell you we are racing there at NASCAR speeds, and the church world seems to be on board with it.

In Revelation 2:4-5 Jesus confronts the church of Ephesus with these words:

Yet I hold this against you: You have forsaken the love you had at first. Consider how far you have fallen! Repent and do the things you did at first. If you do not repent, I will come to you and remove your lampstand from its place.

We are told specifically in chapter one that “lampstand” stands for the church itself. Jesus was not so concerned with His own reputation among the surrounding peoples that He wouldn’t kill off a church that no longer reflected love for He and His Father.

Those who have written about Germany leading up to World War II tell a tragic story of pastors, both Catholic and Protestant, kissing Hitler’s ring for the sake of their own nationalism. Germany had become more important to these church leaders than the eternal kingdom they were to inherit had they opposed the Fuhror and potentially lost their lives.

I believe the Lord executed His Revelation 2:5 judgment against the German (and European) church after World War II. Once the war was over, it became clear that the church leaders had bowed down to Hitler beforehand, and had even helped him come to power. Because of their complicity with the Nazis, most Germans and Europeans (for their appeasement mentality) decided that the church no longer had any relevance or value to their lives because of the betrayal of  their own values.

The Lord took those lampstands away and now the European church is almost nonexistent as it once was.

How To Lose A Church

America is in a similar situation. I pray we do not give birth to a regime like the Nazis. I actually don’t believe that is a likely outcome of our situation, but I do fear for our national “lampstand” status. The church in a region doesn’t fail because people who once believe don’t anymore. Our lampstands are removed by Jesus Himself. They are removed because His church is no longer His, something He cares too much to allow.

To be sure, God is patient with us, but at some point once a church in a region show that they are more interested in things other than God He will take away their lampstand. That church normally dies a quick death, not because people killed it but because Jesus did. Germany and Europe chose other loves before WWII and Jesus killed it quickly off afterward.

Our Moment of Decision

Looking back at history this seems to happen regionally more than it does on an individual church basis. At least it is easier to see that way. Why are there so few viable churches in New England, the place where religious zealots came to find freedom? Was it because people became smart enough to realize they didn’t need God anymore or was it because Jesus Himself took away their lamps? Hint: people aren’t that smart.

As we approach this highly politicized season, I encourage you to spend more time praying for the church than for a candidate. Who we choose as president is an important decision but it pales in comparison to what truly hangs in the balance at this moment.

I beg you to prefer a bad economy and a thriving church over the alternatives that currently face us. Please don’t kiss the ring of those who can offer you nothing eternal.