Is Billy Graham’s Reward Greater Than Yours? 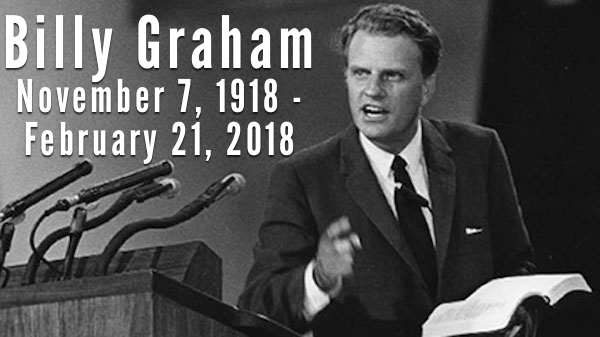 The name Billy Graham is synonymous with evangelism. Possibly the single most influential Christian of the past hundred years, Mr. Graham touched the lives of millions of people in one way or another. He led gigantic crusades in places like the Los Angeles Coliseum and countless events broadcast on television before the idea of Christian TV was even a passing thought in anyone’s mind.

There has simply been no one like him in our generation.

On this day that he has passed from death to eternal life, many people imagine that his reward in heaven will far outstrip anyone else’s by miles. He won souls all over the world and touched the seats of power at home and abroad. For numerous administrations, he had a direct line to the President. His accomplishments for the sake of the gospel are unparalleled. But does that mean that his reward is greater than anyone else’s? I don’t think so.

I believe that Billy Graham was obedient to the call God gave him, and we should all be thankful for that. But that call—the call to evangelize—didn’t come to him because he earned it. In the Christian life, we are all called to evangelize and disciple, but not all of us are good at it. And it’s not for a lack of trying.

There is an understanding within Christianity of something called ordination. That term gets tossed around a lot in Christian circles and it has basically come to mean that someone has finished seminary and has started working vocationally at a church. But that isn’t really what it means. Ordination means that God has graced you with a special gifting toward something that goes beyond what is normal for other people.

For instance, everyone is called to pastor. We must all shepherd (pastor) our children and our own family, but that does not mean that we have been ordained to pastor a local congregation of Christians. We have all been called to evangelize, but for most of us we may see one or two people become believers in our lifetimes—maybe only our children. Others, however, have been given a special grace to lead hundreds, thousands and even millions to the Lord. Names like Billy Graham and Reinhardt Bonke come to mind.

But does that mean that because their grace and ability are greater than yours and mine that they will receive a greater reward? Jesus put it like this:

Even though we have all been called to pastor, evangelize and disciple, not everyone of us will be as good at each of them as others. Paul said it like this:

Now you are the body of Christ, and each one of you is a part of it. And God has placed in the church first of all apostles, second prophets, third teachers, then miracles, then gifts of healing, of helping, of guidance, and of different kinds of tongues. Are all apostles? Are all prophets? Are all teachers? Do all work miracles? Do all have gifts of healing? Do all speak in tongues ? Do all interpret? Now eagerly desire the greater gifts.

These are all rhetorical questions that Paul asks. Of course not everyone is an apostle or a prophet or a healer. There’s no magical spiritual understanding here—we see clearly around us that some people are just more gifted towards these things because of the results we see in their lives.

I’ve known people who can walk into a crowded place and people will come under conviction and ask that person how to be saved. I’ve never experienced that and it’s not for a lack of trying. I have given the same kind of messages Billy Graham did, yet I didn’t have thousands respond to my altar call. It doesn’t necessarily mean I’m a bad evangelist, it means I’m not an ordained evangelist.

Billy Graham was graced as an evangelist like few others. And because of that much was required of him. God supernaturally gave him that gift. Billy Graham was no prophet. He probably wouldn’t have made a good pastor. Does that mean that he wasn’t obedient to the Lord because he didn’t pastor a church? No! His God-given assignment was evangelism and he performed it obediently.

If we judge ourselves by a standard that God doesn’t judge us by, then we will live in shame. Someone once said that if you judge a fish by its ability to climb a tree then it will spend its entire life thinking it is stupid.

I think on this occasion of Billy Graham passing from this life to the next it is entirely appropriate to celebrate and remember the incredible life that he had and to marvel at his amazing accomplishments. I am thankful for his life, but I also know that he would not have wanted anyone to judge their life by his.

Today we should celebrate his life and ask ourselves, what is our assignment from God? What places in our lives have we been given much, and how can we fulfill them? How can we be similarly obedient to the specific call on our lives that Billy Graham was to his?

When we walk out our God-given ordination, we will hear the same words from God that Billy Graham heard today, “Well done, my good and faithful servant.”