Is God On Our Side? 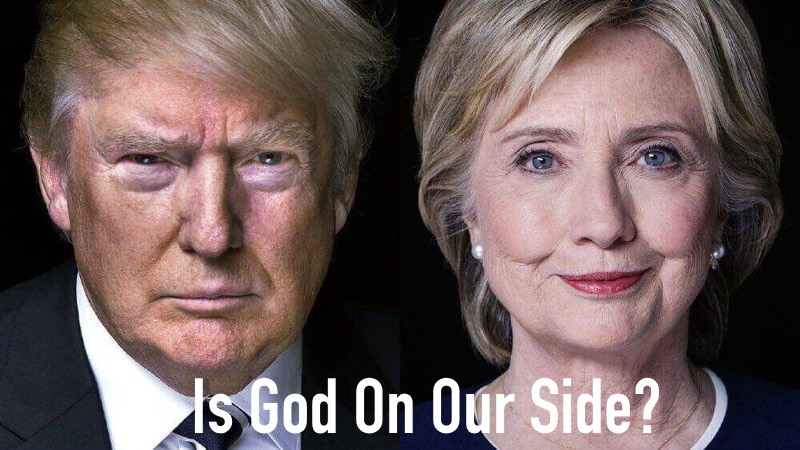 The same was true during World War II. The same could be said in countless other struggles, political battles, and just to throw in the depth of absurdity this reasoning takes, between two professional sports teams. How can two groups of people claim that God is on their side when they are opposing each other? Doesn’t one have to be wrong?

The Lord Is On His Side

The truth is that normally both are wrong. Let’s hear what Abraham Lincoln had to say about the conflict between the North and South in his day:

Fondly do we hope — fervently do we pray — that this mighty scourge of war may speedily pass away. Yet, if God wills that it continue, until all the wealth piled by the bond-man’s two hundred and fifty years of unrequited toil shall be sunk, and until every drop of blood drawn with the lash, shall be paid by another drawn with the sword, as was said three thousand years ago, so still it must be said “the judgments of the Lord, are true and righteous altogether.”

Abraham Lincoln seemed to be the only person, North or South, who expressed the correct sentiment: that God was judging the nation for the specific ill of slavery. He was not on either side, He was on His side, waiting for the nation to join Him.

We seem to be in a similar situation today. We have two candidates that no one in good faith can swear by, yet we hear it every day why we should vote for one or the other. It is generally in terms of how God can only use this person or how if one or the other is elected, God’s favor will surely be removed from our nation.

We would do well to listen again to Lincoln’s powerful words. Hillary Clinton vs. Donald Trump as our two choices for the most powerful person on earth is no coincidence. It is a setup from the God who chooses every leader, great or small.

Let everyone be subject to the governing authorities, for there is no authority except that which God has established. The authorities that exist have been established by God.

I have been hearing many Christians clamor about how we must vote for Donald Trump, or else, as well as Christians and others say just the contrary, all invoking the name of the Lord, whether in sincerity or in vain. Instead of realizing just how sad a situation we are in, many people are doubling down and trying to rely on a process, a party and a person.

The Lord is trying to get the attention of His people. He does not want us placing our faith in anyone other than Him. When our hope grows more and more misguided, He will at first gently, then later less gently, correct our path.

Donald vs. Hillary is a wake up call from the Lord. Not a wake up call to save the nation, but one that beckons us to understand that we are already so horribly askew that we should fall to our knees. Unfortunately, I see just the opposite today. More people seem to be trusting in the process, party or the person.

God is showing us that we need to be repenting and praying, yet we further indebt ourselves to the problems that have gotten us here. I hear the Lord speaking to His people, “when will my people seek My counsel?” How long until we ask the Lord where these things are leading us?

George Mason, one of our founding fathers, made a salient remark about slavery, but one that aptly applies to today as well:

Every master of slaves is born a petty tyrant. They bring the judgment of heaven on a Country. As nations can not be rewarded or punished in the next world they must be in this. By an inevitable chain of causes & effects providence punishes national sins, by national calamities.

No nation is judged before the throne of the Lord in heaven, but in this age on the earth during their appointed time. America is under judgment, and our current election is proof of the Lord for this. It is not the wayward decisions of some tea party crazies or liberal elites. It is the Lord.

How many sins can we think of that are approved of, and even funded by, our government today? If the Lord was willing to judge the nation for slavery in such horrific terms, how much more so for our shedding of innocent blood that happens every day?

It is time to wake up. This election has already been lost, no matter who wins. It is time to earnestly seek the Lord, repent and pray for our future. Who knows, maybe the Lord will have mercy on us and leave a blessing instead of a curse.

One final thought: George Mason was a slave owner himself, which should give us pause to our situation today. How much greater should our repentance be when we, as the church, realize how complicit and institutionally involved in the very ills of our time we have been?

We are no different from George Mason; in no less a time of peril than Abraham Lincoln, although we may not know it yet. We need the Lord alone to step in and change our course. No process, party or person can change that now.

Lord, forgive our many sins and have mercy on us.