Lessons From The Garden 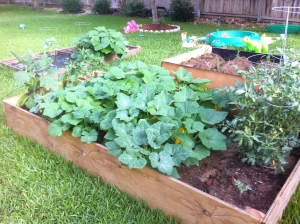 It’s funny, but all my life produce came from the grocery store.  Don’t get me wrong, I learned pretty clearly in kindergarden that apples came from trees and corn came from seeds that were planted in the ground and given water, sun and love.  But when my son asked me what kind of plant goldfish (the edible kind) came from, I thought it might be good for both of us to learn how much work it takes to put food on the table.

Here’s the problem: the Hibbs don’t have a green thumb.  In fact, when we moved to College Station we bought a very lovely house with an even lovelier bit of landscaping.  The previous owners spent all their time outdoors working on their flower beds.  We appreciated the work they put in, but I knew that wasn’t for us.  I declared that the Hibbs’ policy would be that if any plant in our yard could survive by itself (and a little sprinkler watering) all year, it got to stay here.  So getting things like green beans and corn to grow in our yard was going to be a longshot.

I built some raised beds with some spare lumber and we planted away, very late mind you.  June is pretty late to plant anything in Texas, but we went for it anyway.  Most of our growing has been a futile attempt at producing leaves and not much else on our plants.  We’ve had a few eggplant and okra, which I don’t care for, and very few squash.  But that doesn’t mean that we haven’t learned a few lessons along the way.

Not being from anything near an agrarian background, my wife and I have learned a few lessons that the Bible has reserved for those who know what growing food is like.  For instance, I never really understood the concept of a plant not producing.  I figured that if you planted a bean plant in the ground it was going to produce.

I planted a little squash seed in one of our raised beds and it grew up to produce the most beautiful squash plant I could have imagined.  I was very proud of myself for actually growing something big and pretty.  In fact, the squash plant grew so big and pretty that it covered everything in the bed, including a couple of tomato plants and all my green beans.  So big were its leaves that it killed everything else in the bed.  It was beautiful and its large green leaves soaked up the sun for two months.  The problem was that the only thing it ever produced was green.  It lacked ever producing these little yellow things that we could put on our dinner plates, which was the whole point in the first place.  Then, after killing everything else in the bed, it promptly got eaten by squash bugs and died.

My wife was struck with the symbolism, that until now we lacked the experiential knowledge to perceive.  Such a good-looking plant never produced any actual fruit, and in the process killed other plants that probably were going to (my green beans had pods starting to grow).  Like that squash plant, so many good Christians are able to put up a good-looking front, but they sadly never produce anything with their lives.  They go to church, say all the right things, have church buildings named after themselves when they give lots of money but never actually produce anything the Lord might consider fruit.  Jesus said that such plants would be cut out and thrown into the fire.

Beginning to realize that wasn’t just a symbolic phrase spoken by Jesus, but an actual reality when it comes to farming, I decided it was time to pull out all the tomato and tomatillo plants in my garden.  They had produced hundreds of flowers, but not one tomato or tomatillo (like a small, green tomato used in Mexican food dishes).

I woke up from that thinking that it must have been a “pizza dream.”  Why would the Lord care about the silly tomatillos in my garden?  I didn’t give it much thought until that next morning when I went out to the garden to pull up the tomatillo there were five or six bees buzzing around it preventing me.  I’d only seen two bees in our garden in the four months it had been there, so I was shocked.  The fact that the bees were buzzing around the tomatillo like in my dream shocked me even more than their presence.  It quickly seemed less of a pizza dream.

Within a couple days it was obvious we were going to have a plentiful tomatillo harvest in the coming weeks.  But I was confused about why Jesus would care so much about us being able to make some fresh salsa verde.  Then, through the input of my wife and mother-in-law, it was clear.  We planted our garden about the time we began planting this church.  It’s been a very interesting process.  We’ve all come from traditional church situations where very little fruit develops for all the effort spent.  Over the past several months we’ve learned a little about what is worthy of our time and effort and a lot of what needs to be cut out and “thrown in the fire.”  I’m not saying most churches produce no fruit–that there’s nothing good going on anywhere; but I think it’s pretty obvious that most don’t produce much.

We’ve been praying daily for the Lord to give us the harvest for five months now.  We’ve not seen many people come to the Lord, much less stick around with us to grow into much.  We haven’t had any thoughts of quitting, but it can be discouraging to start a church and not have many (or any–at times) people come.  But the Lord loves to speak of souls coming into His kingdom in terms of harvest.  The imagery is so perfect.  As Paul said, “one plants, one waters and another reaps the harvest.”

The week before I had really been crying out earnestly to the Lord to show me if we were doing something wrong, and if so, what we needed to change.  We hadn’t seen really any fruit (the terms I often use), and it was becoming discouraging.  I had asked the Lord specifically for a dream or prophetic word from someone else to keep us on the right path.

The tomatillo dream was the Lord giving me the encouragement I had been asking for to keep going the week before.  We have as a core value holding daily prayer meetings.  I knew from the get-go there would come a day we would all grow tired of them, especially if not many other people joined us.  Prayer meetings can be hard; boring an monotonous as the weeks and months pore on.  We rarely see the fruit of our prayers immediately, but God promises if we remain faithful to prayer, He will certainly answer us; “speedily” in His time frame (Luke 18:1-8)

Just like any plant that produces fruit, we need to constantly prune it to keep it producing at its peak (something we didn’t understand until we planted this garden).  We probably will change how we do our prayer meetings and maybe at what times, but the reality of daily corporate prayer meetings won’t change for us.  They’re a necessity for the church in our day to regain what we’ve lost in our walk with the Lord.