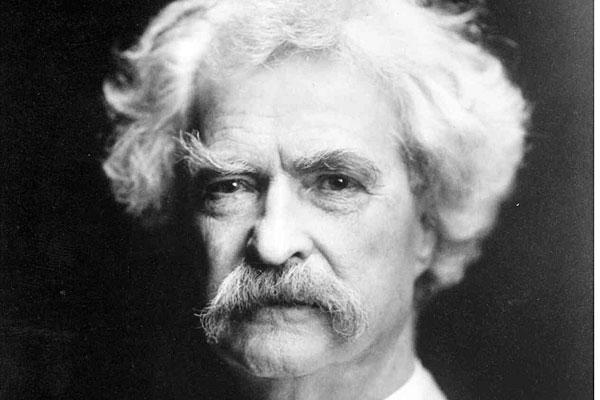 I have a confession to make. Mark Twain, not Jonathan Edwards or George Whitfield or even Joel Osteen, is my favorite American writer.

But Mark Twain was an atheist before they really existed. He was cynical of all things religion because he looked at so much with a critical eye. He asked the why question more than anyone in his day. But it’s that why question that causes us to grow. It’s often those visionaries who ask “why?” and “why not?” that aren’t understood by others. That lack of understanding often causes them to walk away from whatever deeply held values the rejectors hold. Twain just couldn’t stomach what he felt were the masses of dumb sheep following something that didn’t make sense to him.

I suppose no one was ever able to communicate the gospel to Twain on his level, or he just rejected the idea of his desperate need for salvation. Whatever the cause, he’s one of America’s greatest out-of-the-box thinkers. We must always remember that God didn’t put us in boxes, He set us free. I’ve found that there is only one thing in life that is unquestionable before God: whether or not He is good. But if your foundation always starts with God being good, there is no question we can’t ask that isn’t worthy learning from.

Twain’s zeal for truth was unparalleled in his day. He traveled to the Philippines just to see with his own eyes why the United States government felt the need to inject themselves into a war there. He was candid and vicious with his observations, but this was before the days of foreign bureaus for large news corporations. He may have been one of the only independent spectators of the conflict. His insight may be the best recollection history has of the conflict. He also traveled to Israel to see it with his own eyes. Few people of his day could say that.

Twain’s humor is of course his most beloved legacy. His why questions led him to see things differently than most people. It’s only when you can see things differently that you can call attention to them. If you follow the herd, all you see is the rump in front of you. You have to leave the pack to look at them from a hillside to get a proper view. Twain did this and was smart enough to know that often the most palatable way to call attention to our human tendency toward lemming-like behavior is to mock it. In much the same way we have Jon Stewart and Stephen Colbert today.

What Can We Learn?

So what is it that Christians can learn today from a man who was atheist before it was en vogue? We can start with the quote I posted yesterday:

“To succeed in life, you need two things: ignorance and confidence.”

There’s nothing more foundational to our Christian faith than these two things. Our success comes from 1) Ignorance of our past sins and failures. If God has forgiven them and forgotten them as far as the east is from the west, what place do we have in remembering them?

And 2) Confidence in that we are redeemed and have a good future ahead of us. The fear of failure keeps us all from doing great things. What if our future was already secure and our failures were but mere stubs-of-the-toe along the way? Guess what? That’s what they are.

We can have confidence in the God who has radically transformed us for eternity and ignorance of our past sins that we have confessed to our Maker.

I often kid with my wife and say “With you I just can’t win,” to which she always replies, “No, with me you can’t lose.”

Our success is certain: we can’t lose.

Choose this year to be ignorant and confident in the One who has redeemed you. And if you haven’t placed your trust in Him, there’s no better day than today.