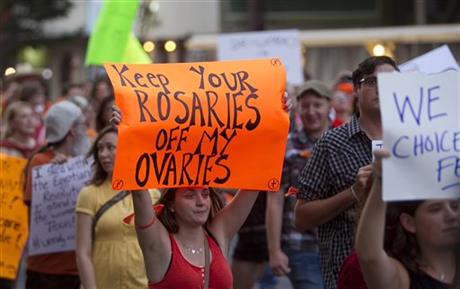 I’ll warn you up-front: this is going to be long, and if you’re given to being easily offended: offensive.

Last night the Texas Senate passed HB 2, a bill awaiting Governor Perry’s signature that will force all abortion facilities to adhere to ambulatory surgical center standards, outlaw abortions past 20 weeks and require providers to have privileges at a local hospital. You may read the entire bill for yourself here.

I generally say little about the abortion debate publicly, because in my mind it is a foregone conclusion that it is the most heinous act our society allows and participates in. I fully understand the arguments of the other side, but I cannot for a moment conceive how they can honestly argue for such monstrous behavior. There I go with the offense already.

I’ll say this clearly: if we hold that men like Hitler and his Nazis, men like Pol Pot or Joseph Stalin and Benito Mussolini were “monsters,” then I can scarcely apply to our society any less the term when it comes to those who fight for abortion. There is no place inside a rational mind to conclude that a fetus is anything other than completely human. At no point is is ever simply “tissue.” Once the process of conception has begun, at no point will that “tissue” turn out to be just an ear, or a kidney.

No, the life that is begun at conception is not the scientific manipulation of DNA or stem cells to be turned into body parts; that process is human from the beginning and at no point is it ever anything else.

So, the abortion debate is all about people’s ability to murder a human who has no power, no control and no say in the matter, a wrong our nation has fought hard to right for every other people in its history. The Native Americans were murdered and forced west in the trail of tears. Black men and women originally from Africa, strictly because they were black, were deemed as only mostly human in our constitution. Women were not allowed to vote for the majority of our nation’s existence. All these, and so many more, are horrible wrongs that history looks unfavorably upon, and abortion is of all these the most heinous.

In my book, The Year of the Lord’s Favor?, I gave some examples of why it would be foolish for Americans to tell God He has no place to judge us for our sins. I only mentioned abortion in passing because, as I said before, it is a foregone conclusion to me that to fight for it is monstrously wrong. But something caught my attention in the debate of the Texas Senate yesterday. Something very troubling that I see as a large, ever-growing trend in our society.

One Senator opposed to the legislation grew irate at another Senator in favor during the debate, because the pro-abortion Senator felt his “faith” was called into question by his stance in favor of abortion. Let me be clear, whether you believe faith does or does not have a place in the public discourse–from an eternal perspective–that man’s faith being called into question may have been the kindest thing that happened on the Senate floor yesterday.

Americans have had a troubling misunderstanding of what it means to be righteous and holy, according to the Bible, for a long time now. Romans 1 (as I discuss in my book) lists all the sinful things that will condemn a person to hell. In addition, 1 Corinthians 6, 1 Timothy 1, Galatians 5 and Revelation 21 also have lists of sins that will condemn a person to hell. Instead of devoting themselves to understanding what these passages mean, Americans are increasingly writing these passages off as in conflict with the “God of love” who certainly wouldn’t send any “good person” to hell forever.

That is a terrible tragedy, and it has allowed our culture to completely redefine morality. Because we have thrown out the warnings of scripture and retained only the parts that tell us we are okay to keep sinning and God will love us, we have perverted the gospel of the grace of God given to us.

What these passages are clearly getting at is that if a person engages in these activity in an unrepentant manner, they cannot inherit eternal life. I generally steer very clear of playing arbiter of anyone’s soul. I don’t know what is going on in someone’s heart to definitively tell them either way if they will go to heaven or hell. But the apostles were not so timid as I, so I stand on the basis of their warnings. And warnings are, against popular belief today, paramount to understanding the gospel.

On the day of Pentecost, when the first “salvation message” was given by Peter, Acts 2 clearly tells us that Peter, “with many other words he warned them; and he pleaded with them, “Save yourselves from this corrupt generation” (Acts 2:40). This is the message that brought in the greatest one-day harvest in scripture. Paul sums up Peter’s message very clearly in Romans 11:22.

Consider therefore the kindness and sternness of God: sternness to those who fell, but kindness to you, provided that you continue in his kindness. Otherwise, you also will be cut off.

Warning those bound in unrepentant sin is a must when we are relating the gospel. But watch that key term: “unrepentant,” because it is critical. We all sin. We all fall short of “God’s best,” as Joel Osteen would say. But that doesn’t mean we will suffer the wrath of God for the sins described in the New Testament. No, 1 John 1:8-9 makes this issue very clear:

8 If we claim to be without sin, we deceive ourselves and the truth is not in us. 9 If we confess our sins, he is faithful and just and will forgive us our sins and purify us from all unrighteousness.

Confession of sin is the measuring line, then. I cannot stand in judgment against someone who has had an abortion, or someone who has in the past advocated for it. Confessed sin before God is covered by the perfect, sinless blood of Jesus. It doesn’t matter what that sin is, it is covered. But to refuse to acknowledge sin as sin, that is a dangerous place to be in. That is where things get scary. And that is why we must warn.

When I say warn, I don’t want to conjure up images of a street preacher with a 20 pound Bible in hand, shouting at passers-by that they are hell-bound. That’s not my intent. That sort of thing is sheer condemnation, and I cannot make those judgment calls. What I can say, very confidently from scripture, is this: if you participate in sin with no remorse, if you advocate for others to participate in sin with no feelings of hesitation, or if you seek to redefine sin as good to sear your guilty conscience, then you are in grave danger.

Our culture has been systematically redefining evil as good and good as evil for quite a while now. We have reached a tipping point where almost anything is open game now. Morality no longer has a basis outside of polling data. Of these things we Christians should sternly warn our culture.

Will we be vilified? Absolutely. Will we be hated? No doubt. Will we be honored by a savior who will return to “judge the living and the dead,” as the apostles’ creed puts it? For sure.

Warning people that unrepentant sin is a painful task to take part in, but it was one that the apostles did not fear. They feared the one who would account blood to their hands for not proclaiming the truth of God’s coming judgment.

So let me conclude with this. The senator who called into question another’s faith for standing strong for abortion rights–he did well. If you find yourself, in any way, advocating for someone to have the right to kill an innocent child, you stand on the wrong side of history. If we, as Jesus called “evil” (Matthew 7:11), have been smart enough to call monsters those who took innocent life by the millions before us, how can we judge ourselves any different for abortion?

And if you find yourself advocating for your right or anyone else’s right to kill innocent children, let me warn you with the words of Paul:

Although they know God’s righteous decree that those who do such things deserve death, they not only continue to do these very things but also approve of those who practice them.