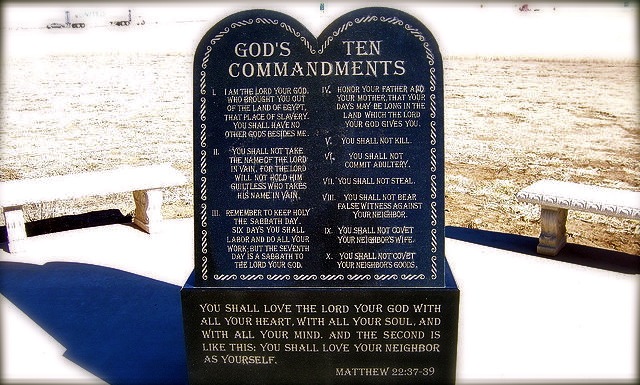 I’ve been noticing more and more that people are very concerned with morality these days. Our culture is being flooded with calls for justice, equity and doing the moral thing. It all sounds good, right?

Don’t jump on the bandwagon just yet.

Morality in America has always been behaving by a set of rights and wrongs as defined by a natural (unchangeable) law. But as we live in an increasingly post-modern era that natural law has taken a back seat to “positive law,” or laws that change with the whims of the people. Other than what was defined in the Declaration of Independence, positive law is what our nation was built around. Governance by the people. Democratic rule. (We’re actually a representative republic, just to be clear)

But the ever-changing positive law was always to be governed by an immutable natural law. Our nation’s founders feared that without it our nation would crumble. That means that our ever-changing legal code must always be judged by the foundational morals we believe in.

That means we’re faced with a choice: pass laws that are wrong by virtue of our moral code or simply change what we call morality. We’ve opted for the latter.

I’m not a fan of how inappropriately the church world has handled the issue of homosexuality over the last couple decades, but nothing illustrates my point more in recent history.

Gay marriage and rights have been a fight waged in court houses and legislatures for some number of years, but every time the appeals for “marriage equality” have failed because gay marriage has never passed the test of our moral code: marriage is a union between a man and a woman.

After losing that battle time and time again the activists subtly changed the strategy: change the code. Reframe the discussion around morality, not laws. In the last several years less and less has been spoken about whether or not it should be legal for gay people to marry but whether or not it was right to forbid them to do so. Is it just? Is it…wait for it….moral?

The rhetorical answer is of course, “no,” but something gave the homosexual movement serious traction last year. Our president came out in favor of gay marriage because he didn’t feel it was moral to forbid gay couples from enjoying the same status he had.

So what does all this mean to us? Should we shout from rooftops that gay marriage is in fact wrong? That it’s an abomination before God?

Good luck with that.

How Do We Change Course?

While God’s people have been trying to wage legal battles, trusting in the legislatures and courts to uphold our moral code, others have slipped in behind us and simply changed the definition of what is moral. We’ve given our time, energy and resources over to men to fix a problem that only God is equipped to face.

We are witnessing before our eyes a radical and complete redefinition of morality, justice and equality. So, is there a way to stop it?

Yes, there is, but we’re still running the other direction.

Our nations problems aren’t legal right now, but moral, and if we want to see our problems fixed we must turn our attention back to proper place: the God who defines morality.

The church has always tried, very unsuccessfully, to legislate its morality upon others. We’re doing it again now and looking really stupid trying. Just think about all the greatest crusaders for Christian morality in the past decade and their secret sins that eventually get revealed. We’re living the Scarlet Letter all over again.

No, change doesn’t come from us legislating right and wrong upon other people. It comes from those people meeting the One who defines morality for themselves. We can’t solve America’s problems by shouting or making new laws. We can fix her problems when we are filled with the power of God on our lives. What is the power of God?

The Power of God

22 But the fruit of the Spirit is love, joy, peace, forbearance, kindness, goodness, faithfulness, 23 gentleness and self-control. Against such things there is no law. Galatians 5:22-23

We can only live with these fruit of the Spirit if the Spirit is empowering us to live that way. Society as a whole benefits from a godly moral code, but we’re currently losing that battle. Our only path to fixing it is to start living our moral code ourselves, and we need the power of God to do that.

Whenever a people have the power of God on their lives to live holy lives, though, they change nations. If we will pray and seek God to change us, then and only then will He change those around us.

Will you choose to live out God’s moral code? Will you ask Him for His help to do it on a daily basis? If you will, I know our nation’s morality will rewrite itself.