The Dangers of Judgment 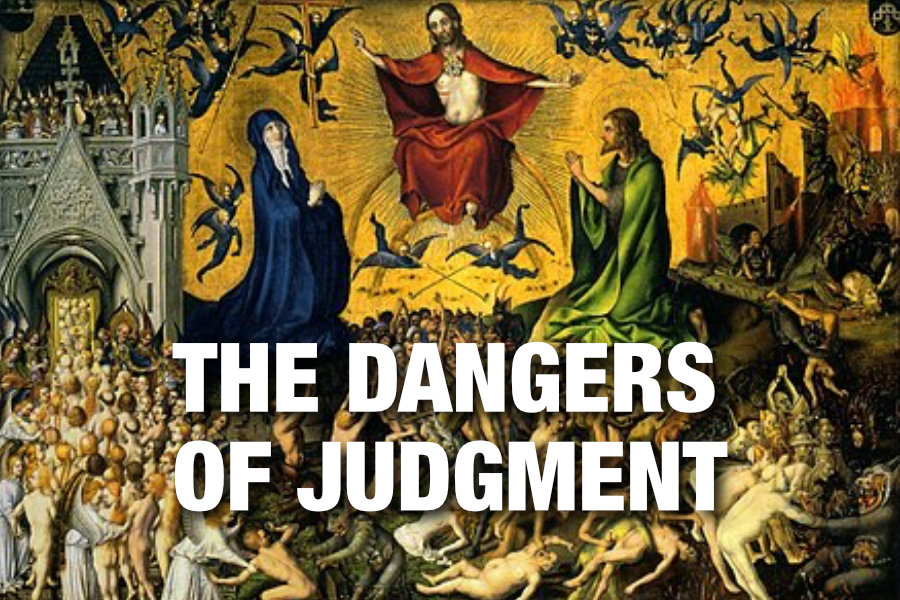 I was excited to hear a woman speak at our church one particular Sunday years ago. She had been the director of our town’s local Planned Parenthood clinic but had left and had since become an outspoken critic of Planned Parenthood and abortion in general.

I had heard rumors of what happened—it was huge news among the pro-life people in our town—but I was really looking forward to hearing the story straight from her. She’d already had a few media appearances before this Sunday, but not nearly as many as she would have in the coming months and years. She’s since been a regular on many news outlets whenever Planned Parenthood or abortion comes up as a national topic.

As I walked into the lobby of the church, an old high school classmate greeted me in the foyer. He was in the graduating class one year ahead of me, but we had known each other for years. We played on the same soccer team for a couple years when we were ten or eleven.

I was happy to see him and a little surprised as to why he was there. I asked him how he found his way into our church and what brought him to town. He said that he had been living there for many years now and that his wife was speaking at the church that morning.

I’m sure the shock on my face was evident. We had graduated from a private Christian school years before. I was pretty sure we all knew that it was frowned upon to date, let alone marry, a director of a Planned Parenthood clinic. I’m pretty sure it was in the school’s bylaws or something.

Doug gave me the briefest of stories of how they met, married and got to the place where they were now. At no point had either of them felt like they left their faith in Jesus by her working as the director of one of the most heinous organizations in human history. At the time, they both felt like she was performing a wonderful service for women and had continued going to a liberal church the whole time. In other words, they were sincere in their intentions.

It wasn’t until Abby Johnson was asked to take part in an actual abortion procedure, something she had never had to do in all her years at Planned Parenthood. Immediately after the procedure, she walked across the street to the Brazos Valley Coalition for Life and asked for help. She knew that she had made a terrible mistake and had no idea where to go from there.

Fortunately, they’re an irrepressible couple, and two of America’s greatest voices for life today. Abby has a wonderful book and a soon-to-be released movie about she and Doug’s story that I hope everyone will read and see.

In the wake of one of the most heinous laws ever passed in our nation’s history, my social media feed has been full of many different reactions to New York’s recent abortion edict. Because of my book, I’ve also received countless messages asking what I thought about One World Trade Center being illuminated pink to celebrate legal abortions up to the point of birth.

In the melee of reactions, I have seen good, bad and ugly. It seems that our already polarized nation is retreating further into battle positions, so it is no surprise that I have seen clever reactions, thoughtful reactions and some that have saddened me. Obviously, those who rejoice over the death of unborn children cause me great sadness. But it was something else that caused me grief.

Two reactions that were particularly troubling were those Christians calling for the eternal judgment of Governor Cuomo and those warning the nation that we are headed for judgment, and happily so. Those who proclaim the judgment of America for our sins often seem that they are happy for it. They speak of being happy that we will get what we have coming to us.

This bothers me deeply. It pained me to see the faces of Governor Cuomo and the New York State Assembly when they passed a murder law. They smiled. They cheered. It truly was the face of evil in our land. It was truly a face I had not seen since I had looked in the mirror that morning.

I have no merit to attain to God’s Holy Presence on my own. In fact, on my own, I contain only wickedness that justly deserves the eternal punishment so many would seek for Governor Cuomo and anyone like him. When he said this, the Apostle Paul truly meant it:

For I know that good itself does not dwell in me, that is, in my sinful nature. For I have the desire to do what is good, but I cannot carry it out.

I believe that what New York did this past week was truly evil. I think we should call evil for what it is, unashamedly. But to then pronounce judgment over a person on our own accord; that troubles me.

What has been proclaimed over Governor Cuomo this week sounds much like the stories that Doug Johnson told me he and his wife Abby had received after she had left Planned Parenthood and turned pro-life. She had repented of her actions, but that wasn’t good enough for a large number of self-righteous self-proclaimed Christians.

Our nation owes a debt of gratitude to Christians like Shawn Carney, the current director of 40 Days for Life, and others who took Doug and Abby Johnson in and let them heal and grow instead of rejecting them. I pray that Governor Cuomo will one day repent and be taken in by similar followers of Jesus. People who realize that except for the grace of God, we would be in the same place.

In the Seat of Judgment

As for those who exuberantly proclaim judgment against our nation; I am heartsick. I do not say that lightly. As someone who has written a book exactly about God’s coming judgment of America, I assure you that I take no pleasure in it. In fact, I proclaim it only because of the clarity with which I heard it.

I have written extensively about that on my website and in my book, so I will not rehash that here.

What I do want to say clearly is that I live here. My children live here. My friends and family are Americans. I have no desire to see judgment befall us because I know exactly what that means when God judges a nation.

I cannot argue with God that America doesn’t justly deserve the judgment that I know He has proclaimed. We most certainly do. But I will not fail to offer a bold prayer to God until my dying day to beg for mercy.

Because judgment without mercy will be shown to anyone who has not been merciful. Mercy triumphs over judgment.

We have done nothing to earn the right to ask for mercy, but because of the shed blood of Jesus to wash away our sins, we have the dignity and privilege to ask God for it. As such, I will choose to waste my breath on that prayer. It will be the wasteful offering from an alabaster jar I give to God and my nation, as Mary of Bethany did.

When I look at my nation and the direction she is headed, prayers for mercy do in fact seem like a waste of too little too late. But I know that there are more Doug and Abby Johnsons out there. I know I serve a God who hears, and even bargains for the lives of the wicked. I have no problem calling people and their actions wicked, because I know who I am without Christ, but I will fight with all my heart to give them the same chance that I had to come to know the risen Christ.

What We Can and Cannot Judge

When we call wickedness wicked, we do in fact judge. But when we call what God has already called evil, we make a sure judgment that we can be confident in; in fact, we are required as Christians to call that which God has called sinful as such. But when we cast eternal, or even temporal judgment upon others or our nation, we are taking God’s seat. We move beyond the surety of His Word and into the morass of our own self-righteousness.

And If for no other reason, pray for our nation because we live here.