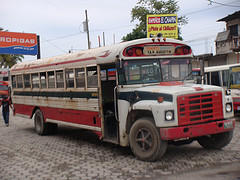 I was completely undone by what I was hearing. I couldn’t believe that such things existed. I had been asking and asking for such things for six years with nothing. But then again, I wasn’t totally sure what I was asking for.

I was in the rugged mountains of Guatemala gazing listlessly out into the picturesque fields dotting the slope across the river. I was listening to a tape series about contemporary prophecy as I was sitting on my own bench of a retired American school bus the locals lovingly call a “chicken bus.” The tape I was listening to had the kinds of stories I’d been asking for over the past six years. The kinds of things that happened in the Bible. Some of them even more amazing than what happened in the Bible. But maybe that was because they happened to someone today.

I was listening to the most amazing stories I’d ever heard in my life while looking out over the most beautiful mountainside I’d ever seen when something stuck in my mind. I pulled off the headphones and looked as far across the mountaintops as I could. A thought kept running through my mind and I couldn’t shake it. I hadn’t thought about it before, but now that it was there I couldn’t get it out of my head.

I’d given up my summer in college to travel to the most remote, desolate place on earth I’d ever imagined. I could have stayed home and had fun at the beach like a lot of my friends, but I chose to raise money to travel to somewhere I’d never heard of before to tell people about Jesus I may never see again. Why?  The words rang over and over again in my head so loud I couldn’t hear anything else.

“Because these are the people I love.” That phrase stuck with me more powerfully than anything I can remember before it. I smiled as I pondered the reality that God had sent me to tell some of the people He really loved about Him. It made me happy that I got to be a part of touching God’s heart.

I melted back into gazing across the mountainside, this time without headphones in my ears. Our 13-hour trip was almost over and I just wanted to soak up what the place looked like where the people God loves live. The hillsides were dotted with tiny little communities you could only spot because a few puffs of smoke rose from the trees. It felt like being sometime, not someplace, as if we’d stepped back into the distant past several hundred years ago.

We arrived at our destination, which happened to be the end of the road. Literally. Our guide was happy to meet us all. Pablo was the same size as every other Guatemalan man I’d met: 5′-3″ tops. But his manner made him seem much taller than all the rest. He was jovial and engaging even with my abysmal lack of Spanish I felt like I instantly connected with him. He introduced us to what is known as the “Ixil Triangle” and went on to thank us for coming. Then he said something that still shocks me to this day.

“I want to thank you all for coming so far away from your homes. I know it was a big sacrifice for you all to be here, but I want to tell you why you all came here. You are all here because God loves these people. These are the people God loves. That is why you are here.”

My jaw was gaping open, I’m sure. I had understood enough of what he said in Spanish to know what he had said, but when our translator confirmed what I’d heard, I was mesmerized. Not by this small man who had just told me the meditations of my heart from 30 minutes earlier, but the fact that God was able to communicate to both of us the same phrase. The implications of this in real life were astounding!

It may seem small to you, but the fact that he used the very same sentence that resounded through my head before captured my attention. Maybe he’d said that same thing to every mission team that came before me, but he didn’t know what I’d been silently pondering a half hour before. And what’s more, I knew that I hadn’t been actively thinking about it. My mind had been somewhere else and all of a sudden that phrase got planted in my brain, and I knew I hadn’t put it there. At least, now I was sure I hadn’t put it there. A typical street in the Ixile part of Guatemala

The joy I felt the rest of that day knowing that I had truly heard God’s voice outweighed the gross neglect I’d put into training my body for the rigors of mountain climbing we were currently engaged in. Every day seemed like we made at least six 4,000 vertical foot ascents and descents every day. My body was exhausted beyond imagination, but my spirit was alive like I’d never felt before.

Since that time I’ve learned to pay attention to those little thoughts that run through my mind. I can’t recount to you the number of times this has happened since then, but you always remember that first time you know beyond a shadow of a doubt you heard God. I’ve also learned to pay close attention to people; especially when they’re praying for me. I’ve found that when people pray for me they unknowingly pray the very sentences God put into my mind days or hours earlier. It’s His way of letting us know that it was really Him.

I encourage you to start asking the Lord to speak to you every day. I asked every day for almost six years and He did it. He did it profoundly that morning in the little village of Tsalbal, Guatemala.

But nothing prepared me for what I was going to experience next.