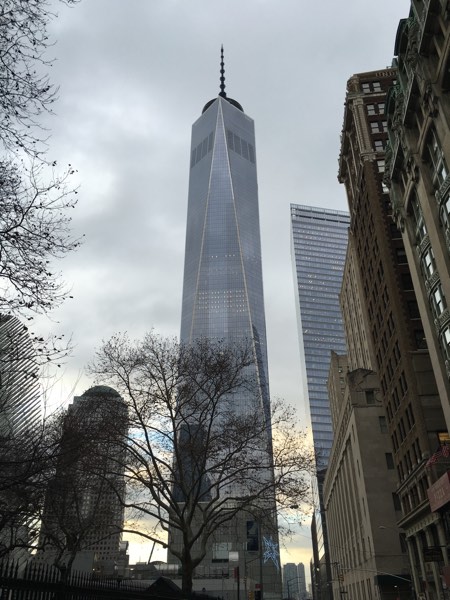 I’ve been in Manhattan today and I had the chance to walk around the World Trade Center site. If you aren’t familiar with why that is important to me, then I encourage you to read my book about the two dreams the Lord gave me about it – the first dream was two days before the 9/11 attacks where He showed me the collapse of the buildings and the second was in 2003 when He showed me this new building that is there now and what it would mean for America.

As I walk around, I feel like I have a different perspective on the site. Standing there now is a beautiful building, artfully crafted and masterfully engineered to rise above the New York skyline as a symbol of who we are. One World Trade Center stands a symbolic 1,776 feet above the ground below, and atop it sits an “architectural spire” that helps it achieve that memorable height. It doesn’t stand alone, however. Two blocks away stands another building with a similar architectural spire, a steeple. St. Paul’s Chapel, the very building where newly inaugurated President Washington led the nation in a dedication prayer, stands directly across from One World Trade Center. As I stood in the back cemetery plot, I gazed up at St. Paul’s steeple and then I noticed One World Trade. Both of them have steeples, in a sense, and they both stand for something.

Then they said, “Come, let us build ourselves a city, with a tower that reaches to the heavens, so that we may make a name for ourselves.”

Make a Name For Ourselves

The Tower of Babel was a bit different in its intent than most modern skyscrapers, but what struck me today at the World Trade Center site is that its spire is there to cause us to look up at its soaring height and remember the enemies who attacked us and how we have shaken our fists at them in rage and overcome by building bigger and better.

As I looked at the two steeples, I grew sad. I grew sad because I know that in the days following 9/11, the entire nation rushed into churches for answers. St. Paul’s itself housed and fed the rescue workers as well as many others seeking answers and understanding of what had happened on that fateful day. What saddens me now, as it did then, is that very few churches around the country had any answers for the people that rushed in. We fed them and clothed them, which is to be commended, but beyond that we had no idea of what to say. The revival that could have been in 2001 never happened because the church was unprepared for such a moment. She was unprepared to find out why it had happened and what to do about it.

I am saddened today by where our nation has gone. Again, I encourage you to read my book, The Year of the Lord’s Favor were I speak at length about what the Lord showed me over a decade ago what would be happening today. Join with me in praying for our country that she would turn back to God instead of to her own devices and cunning.

Let’s gather a people who will make our steeples mean something again and turn the eyes of our nation away from the steeples that proclaim defiance.