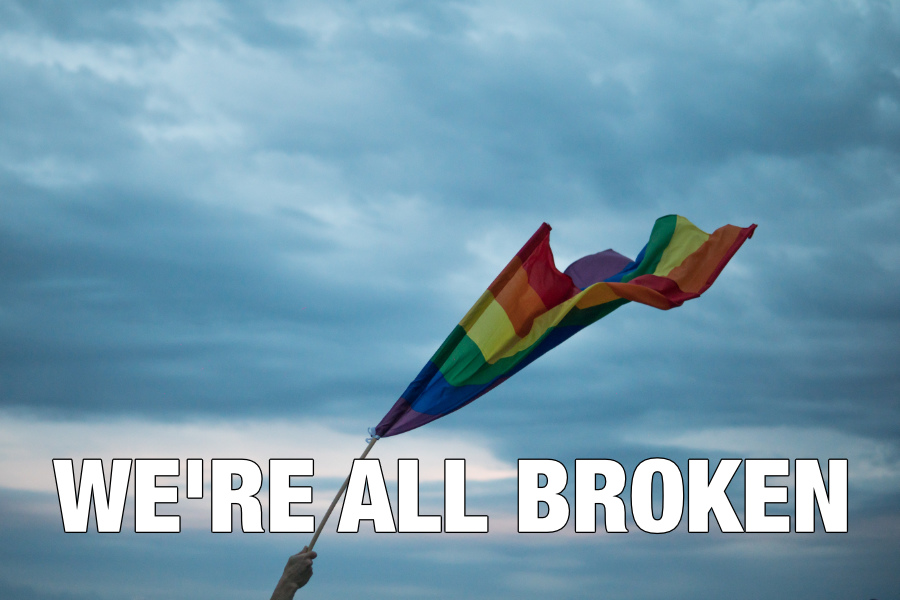 We’re all broken. We’re all sinners. Paul makes that abundantly clear in Romans. Here, he says it right here:

So if we’re all broken sinners, why isn’t the church more accepting of other sinners? Why does it seem like there are sinners who the church accepts and those it doesn’t? Isn’t it the same kind of hypocrisy Jesus railed against the Pharisees for?

There are thousands of churches in America today who have come to this conclusion. We’re all sinners, and we can’t seem to stop sinning. It was Jesus love and His blood that saved us. Why then, should we draw lines in the sand over things like abortion and same-sex attraction? Why not just accept the gay couple? Why not defend a woman’s right to abortion? After all, we all sin too, so who are we to point fingers?

A couple decades ago a movement began within American Christianity. It was the “We’re all broken, so let’s figure out how to do this life thing together” movement. Let’s call it WABSLFOHTDTLTT for short.

The people who started the WABSLFOHTDTLTT movement had an honest aim. It felt like the hell-fire-and-brimstone religion of their father’s generation was rife with hypocrisy. How many of us who grew up in Baptist churches didn’t catch a deacon drinking? It was Jesus’ blood that saved us, so let’s focus on that more and focus on sin much less. That sounded really good.

And millions of Americans agreed.

With this new mindset in hand, teachers were born and turned into celebrities overnight. They could give language to how millions were feeling. Rob Bell was a sensation with his well-produced Nooma videos. We were introduced to a Christianity that had more questions than answers now.

It became more acceptable to be a pilgrim on a journey for truth than a Bible-thumper. After all, we’re just trying to figure life out. WABSLFOHTDTLTT grew and found more of a home in historically evangelical churches. Blogging became popular in the mid 00’s, which gave rise to the join-me-on-the-journey-of-discovery crowd. Besides, there were far too many theologians who disagreed about things they knew for sure.

WABSLFOHTDTLTT became the most popular and powerful movement in Christianity, and almost no one realized it. We were still defining movements by denominational lines, but the internet changed all that. We all now had new places to commune together to hear new ideas online, and those crossed denominational lines for the first time. Something new had been born.

Changing of the Guard

WABSLFOHTDTLTT began to develop its own theology and moral code starting about a decade ago. It’s hard to admit to not knowing anything for too long. Instead of knowing what theology was correct, WABSLFOHTDTLTT decided instead that it knew for sure what theologies were wrong.

Those who engaged with scripture and came to sure conclusions were wrong. None of us can know for sure what God meant in much of the Bible. They knew that Jesus loved us, and that God is love, but beyond that, everything else created more questions than answers. Even who and how God loved was questioned.

More and more voices became popular during this second decade of WABSLFOHTDTLTT’s maturity. Those voices started to clash with popular voices from the old crowd of theological thought. The crusty old hypocrites gave the new guard plenty to write about, and their books sold like crazy. In the space of five years, the money followed the popularity of a new theology, and the old guard suddenly found their ideas no longer publishable at nearly the same rate as before.

By 2010, very little of the conservative evangelical community embraced alternate lifestyles like homosexuality and abortion, cohabitation or transgenderism. At least not openly. In 2012, President Barack Obama declared his support for gay marriage. The news media at large quickly pivoted and became incredibly openly gay, where it had been reserved on the matter before.

Coincidentally, WABSLFOHTDTLTT began speaking up on behalf of the gays and lesbians that the church had left behind at the same time. After all, we’re all sinners, so who are we to judge? Gay marriage and gay inclusion became the force to be reckoned with. But now, WABSLFOHTDTLTT was less on a journey to figure out life and more on a crusade to change the church.

They had now established schools of theology to train conservative evangelicals, almost entirely online. Books and blogs taught these new seminarians that the Bible says a lot of things about a lot of things, so who are we to say what is sin and what is not? Jesus never uttered the words homosexuality. Paul never spoke about abortion. The questioning was over, and the new theology had been agreed upon.

The only sin became being part of the old guard. Their most detestable sin was believing in sin at all. The WABSLFOHTDTLTT movement went through a rebranding, and it became “agree with us or get out of the way.” Let’s call it AWUOGOOTW for short.

Before AWUOGOOTW, churches in America could be recognized by their logos. If not that, their statement of faith certainly made things clear. But after the movement formally known as WABSLFOHTDTLTT became AWUOGOOTW, it became nearly impossible to spot the difference.

Many churches stopped talking about useful social issues for fear of being pushed out of the way by AWUOGOOTW.

This all coincided nicely with an orange-haired billionaire deciding to run for president.

The old guard’s positions on homosexuality and abortion fit well into the candidate’s mounting promises. If you were a church, the vanguards at AWUOGOOTW demanded that you make a statement denouncing the Orange One lest you be publicly shamed. Many, many of the old guard churches capitulated to AWUOGOOTW’s demands.

Voting for Trump became synonymous with the only new sin: believing that we live in a world with any standards at all except what AWUOGOOTW created. AWUOGOOTW had now gone beyond creating a new theology; they had developed a new morality as well.

When Hillary Clinton lost to Donald Trump, it was universally reported as the fault of the evil old guard Christians. They were part of the mounting demise of America, and it was because they were immoral and hate-mongering bigots. The very morals that used to guide the churches in our nation had immediately become immoral.

Because of the election of Donald Trump, AWUOGOOTW rebranded again. They now became “we’re right, so believe what we tell you to, or else,” WRSBWWTYTOE for short.

Not everyone who runs with the WRSBWWTYTOE crowd is as beligerant and determined as their leaders are. Many still espouse the heartbeat of the original WABSLFOHTDTLTT movement that started this all off. But make no mistake, WRSBWWTYTOE is no longer interested in figuring life out. It now wants only one thing: the death of the old guard of Christianity.

We have found ourselves in this condition for one simple reason. It is actually the fulfillment, or at least the partial fulfillment, of an ancient prophecy:

For the time will come when people will not put up with sound doctrine. Instead, to suit their own desires, they will gather around them a great number of teachers to say what their itching ears want to hear.

The original WABSLFOHTDTLTT movement’s problem was not their genuine desire to figure life out, but their genuine desire to do so without committing themselves to God and His Word to do it. In many cases, WABSLFOHTDTLTT’s rejection of the hypocrisy they saw from previous generations was justified. What is never justified is to attach God to hypocrisy.

Instead of seeing the wickedness in their father’s generation and trembling in fear that they would soon repeat it, WABSLFOHTDTLTT assured itself that the path to finding what was right was to go on this grand journey. Their bible was the collective exchange between bloggers, celebrity pastors and conference speakers.

They struck on a nerve that resonated in our nation, and quickly people had a taste for this sweet treat they were experiencing. Sundays without spiritual confrontation. Church without conviction. Life without the struggle of sin. People all over America and the world chose for themselves teachers who would tickle their ears with such things. And they made them rich and powerful.

Romans 3:23 was always the rally cry of every movement designed to cast off sound doctrine. These church movements have always cherry-picked passages to justify their existence. But Paul shoots down their argument with his preamble to the book of Romans:

Through him we received grace and apostleship to call all the Gentiles to the obedience that comes from faith for his name’s sake.

Paul felt it was his mission to teach the unsaved masses obedience to God that came as an outflow of faith. Faith, as Paul saw it, was not an invitation to include sinners into a social institution, but a means by which we could actually begin to obey God’s righteous commands.

Obedience to God is foundational to the Christian life, and any movement that departs from that will ultimately depart from God. If your faith is Jesus is what provides you the ability to obey Him, then you are defined as a Christian by the Bible. If your faith provides you the opportunity to live in habitual sin, you have created an entirely new religion that has nothing to do with God or His Word.

And that is exactly what we have in America today.

A Day to Change

If you have given yourself into this “broken and sinful journeyman” crusade, it ends badly. It ends with God telling you, “Depart from Me, for I never knew you.” It never starts as an outright rejection of sin and peoples’ need of Jesus’ redemption, but it always ends there.

The church wasn’t created to journey together in sin and brokenness. It was established by Jesus to encourage His true followers to pursue righteousness and obedience to God. Yes, sinful people have found a way to make a mess of that, but that doesn’t change the foundational nature of the church.

Today is your day to leave behind a theology and lifestyle that embraces sin as a way of life. It is your opportunity to repent of your sinfulness and accept Jesus and choose to follow Him all the days of your life. If you have never done that, or aren’t even sure what that means, I encourage you to reach out today. You can email me from my contact form on this site.