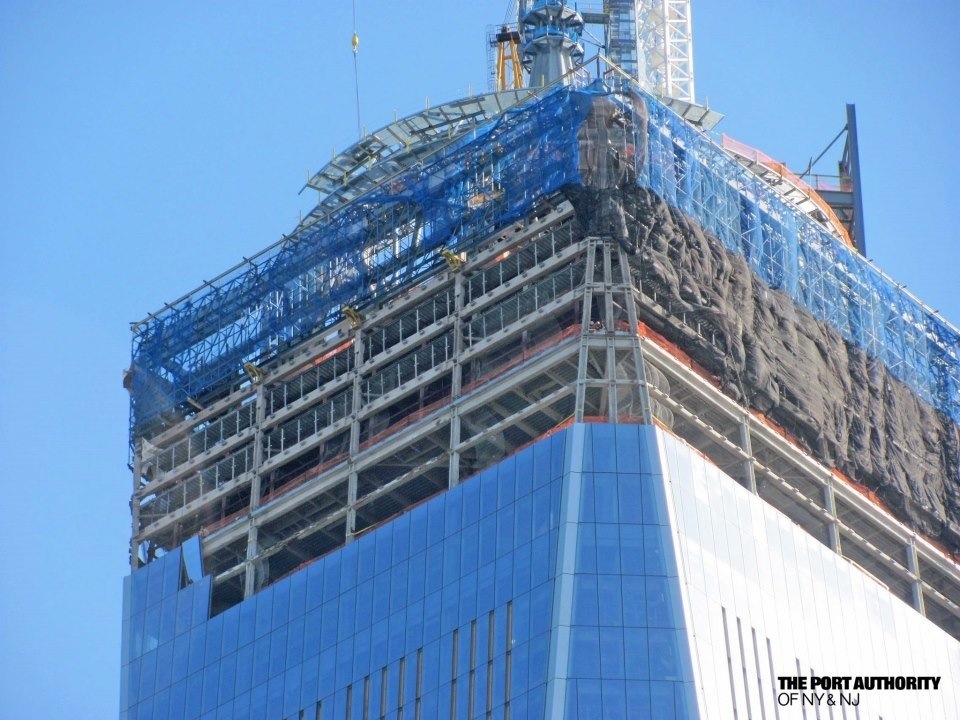 I saw this photo of One World Trade Center today and it reminded me that we’re eerily close to what the Lord showed me in 2003.

I write about it in my upcoming book, The Year of the Lord’s Favor? In March of 2003 I had a dream where I saw this building. I was there to work on the building with many other Christians to rebuild what our enemies had destroyed. The dream was filled with good feelings of patriotism and a sense that we were building this “for God and country.”

The dream moved quickly from where the building was about half done to about what it looks like in the above photo. I was in one of the rooms at the top of the building like you see here when a man walked in whom I immediately knew was Satan. All my Christian friends quickly left the room and it was just Satan and I standing in one of the rooms you can see above the glass. I was afraid he might throw me over the edge, so I quickly found part of the exterior wall that was waist high to hunch down against so he couldn’t just push me over as I worked.

At that point, all I could do was look at Satan. I couldn’t understand why he was there. All the people working on the building were Christians and we had been building it with such good motives. It was if he had come in and taken over and I was very confused. He stood there just staring at me, grinning. It was as if he was giddy about what was happening, that the building was being completed. He looked at me for a long while and smiled one more time and walked out.

I’m not the type to plug my work in a bid of shameless self-promotion, but I feel the book that I’ve written on this is something that every believer needs to read. I can’t tell you how surreal it feels for me to look at this photo and know this is exactly where I stood in my dream when I encountered Satan.

At the end of the dream, the Lord tied the completion of the tower to the sin of societal acceptance of homosexuality. I later understood that Satan had been behind the construction of this building all along, but he didn’t reveal himself until we were at the top.

I believe that it is no coincidence that the supreme court has heard two cases about homosexuality in the past week and it looks like they’re going to rule in favor of gay marriage. The timing of what is going on right now is unmistakably what the Lord showed me back in 2003. The message the Lord gave me from this dream was that we had just a little time to repent. 2013 is going to be a pivotal year for the church and America. If God’s people will return to Him with all their hearts in fasting, mourning and weeping with an attitude of repentance, then He will bless America.

I invite you to download the first two chapters of my book to better understand the timing that I am speaking of. God gave me two dreams over a decade ago; the first was on September 9, 2001, two days before 9/11. The Lord showed me then the collapse of the World Trade Center towers. Then in 2003 He showed me the dream that America needs to hear in 2013.