What Happens When We Can't Trust The Priests? 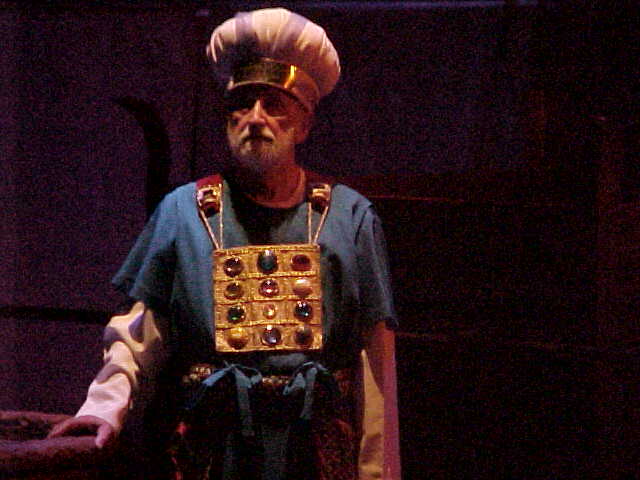 Joash had a rough life starting out. From the time he was born he was hidden away from his family so he wouldn’t be killed. Then when he was seven the priests who had sheltered him staged a cout’d tat and replaced his wicked relative Athaliah with him.

Imagine being a seven year-old king with no family. Imagine the rejection, loneliness, stress and strain of a situation like that. Joash was an impressionable boy and was called upon to lead his nation.

Take a moment to read the back-story of Joash’s troubled start in 2 Kings 10-11.

We understand that for quite a while Jehoiada the priest was truly the one in charge. Young Joash did what his teacher, the man who rescued his life from birth told him to do. Joash no doubt felt he owed a great debt to Jehoiada, so he carefully followed everything he told him all the days of his life.

2 Kings 12:2 makes a sad statement. “Joash did what was right in the eyes of the Lord all the years Jehoiada the priest instructed him.” That makes it very clear that Joash’s conscience was not the Lord, but Jehoiada. What happened? A priest rescued a boy and then instructed him in the most pious resurrection of God’s people in generations. How did Joash fall away?

2 Chronicles 24:17-18 paints a less obscure picture. “After the death of Jehoiada, the officials of Judah came and paid homage to the king, and he listened to them. They abandoned the temple of the Lord, the God of their ancestors, and worshiped Asherah poles and idols.”

How did a country so filled with Godly intentions and works fall so far, so fast? Does this sound familiar? If you’re troubled by where you think I’m going with this, read on.

I’ve told you the beginning and the end of the story. We know that Joash had a Godly priest helping him restore Judah to God in the beginning and in the end Joash rebelled against God and became wicked. What happened in between that changed things so drastically and so quickly?

Joash decided (we don’t know exactly when) to repair the temple building. He’d lived there without leaving for seven years, so I’m sure he was well aware of all the problems the building had. Joash knew where every draft was and he intended to fix them.

Joash called the priests to collect extra money from everyone who was willing to give. The people of Israel were to bring sacrifices and money as offerings to God and that is how the Levites and priests were sustained. They took a portion of the offering to God.

Joash was asking the priests to collect extra money on top of that as a building fund. It was to be separate from the priests’ and Levites’ “salaries.” He had them collect the extra money until enough was gathered to start the work.

We don’t know how long that went on, but by the 23rd year of Joash’s reign, no work had been started on the temple. What had happened? Why didn’t the priests use the money to repair the temple? That’s exactly what Joash wanted to know. He posed that question to his mentor Jehoiada but never waited for a response.

Joash’s suspicion (and what we’re led to believe from the passage) was that the priests had used the building funds to line their pockets. All the money dedicated by freewill offerings from the people had been squandered and the temple still lay in ruins.

The way 2 Kings relates the story we see no emotion in Joash. We’re only given the facts, but that’s the way much of the Old Testament history is. There’s often very little commentary to be found.

Walk A Mile In A Man’s Shoes

But we can easily see what happened here if we simply put ourselves in Joash’s place. Here we have a young man 30 years old who had been saved and raised by the priests. He had trusted them with everything. He looked to them for help to run the country. He had learned God’s Word from them. They taught him honesty, integrity, honor, morality and God’s requirements and His love.

Imagine now how it must have felt when the very people who taught Joash to live with honor and integrity were caught stealing? And the money they stole wasn’t just a rainy-day fund, it was money dedicated to God’s resting place on earth.

Joash immediately took the task away from the priests. He told them not to collect any more money and he wouldn’t trust them to do the construction. He had Jehoiada place a lockable chest in the temple so people could donate to the building fund but the priests could not collect it. (verse 9) Joash had his own royal secretary unlock it and count it out with the high priest to keep him honest.

Then when it was time to do the work, Joash’s officials paid the workmen directly instead of trusting the priests to divvy out the money. They completed the work, but something terrible had happened in the process.

The priests had become untrustworthy not only in Joash’s eyes, but in all the people’s as well. They saw how Joash had to treat them.

What happens when those who teach young people God’s righteous laws are found to care nothing about those laws themselves? The same thing happens today that happened then.

We have lost trust in the church (pastors and leaders) the same way the people of Judah lost faith in the priests. The second Jehoiada, Joash’s “father” died, he abandoned the priests. He abandoned God.

It seems every new day we hear a story about a pedophile priest, a fiery anti-gay pastor embroiled in a homosexual affair or countless stories of leaders who can’t keep their hands out of the till.

When The Priests Can’t Be Trusted

I’ve heard tons of clamor about how we’ve become a socialist state where we are forced to pay taxes against our will to provide for the public good of those who can’t or refuse to work. Since the election, this kind of talk has become vitriolic.

Why has this happened? First we have to recognize that our government (and the governments of the West) is unique. Only nations that have Christian heritages have ingrained into their society the desire to care for the poor and disadvantaged. It’s a concept straight from the Bible. We don’t see this embedded most governments around the world except those who have followed our lead as of late.

Many years ago our leaders became disgusted with what he saw. Our kings and leaders decided the priests couldn’t be trusted anymore to carry out their own work. The excess, the hypocrasy and the use and abuse of the poor were too much for our collective “Joash” to stomach and they took their privileges away.

It’s not working out so well for us, and it didn’t work out very well for the people of Judah, either.

Have we completely abandoned the priests? Where are we headed? How do we get back?

Can America ever trust the church again, and if so, how do we regain trust?

When trust is broken, it’s nearly impossible to repair. Few people will ever give the church a second chance because of the betrayal they feel. For most, it’s probably impossible to regain their trust. But God is really good at the impossible.

What’s happening in the world is important, but we, as the church, must understand that we’ve already lost the cultural war. That’s why we’re the butt of most jokes right now. We have no credibility in the eyes of the world to instruct them in righteousness. The sad truth is they’re right.

News flash: the divorce rate is the same inside and outside the church. The abortion rate is the same. Infidelity, cheating, lying; the list goes on. Our only hope to reclaim those that we’ve lost to the world is to change.

We are like the Ephesians in Revelation 2; we have lost our first love. Now we love money, fame, political power and prominence in the communities. Most of the world recognizes us by these actions, but you would be hard pressed to find too many people who know us by our love. (John 13:35)

I don’t want to discourage those who are currently our bright spots. You know who you are. Keep doing what you’re doing. It’s not in vain. Be the change God’s people so desperately need, but know you’re fighting an uphill battle. It won’t be easy, but Jesus is worth our effort.

And I don’t want to discourage the John the Baptists out there. God has ordained some to continue speaking to the world to change their ways and repent. But know that just like John the Apostle was told in Revelation 10, that speech will be a bitter pill.

It may seem impossible to regain the trust of the world, but God does the impossible. It must start with us recognizing our own problem and fixing it the only way we can: through prayer. Only God can bring us back to the place we want to be. Only our first love will forgive us and heal our land. We must follow God’s promise in Joel 2.

Rend your heart and not your garments. Return to the Lord your God, for he is gracious and compassionate, slow to anger and abounding in love, and he relents from sending calamity.

Who knows? He may turn and have pity and leave behind a blessing— grain offerings and drink offerings for the Lord your God.

Blow the trumpet in Zion, declare a holy fast, call a sacred assembly.
Gather the people, consecrate the assembly; bring together the elders, gather the children, those nursing at the breast. Let the bridegroom leave his room and the bride her chamber. Let the priests, who minister before the Lord, weep between the temple porch and the altar. Let them say, “Spare your people, O Lord. Do not make your inheritance an object of scorn, a byword among the nations. Why should they say among the peoples, ‘Where is their God?’ ”

The question is, do we have the priests who will weep for this nation? Will you be one?

Who knows? Maybe God will bless us yet.