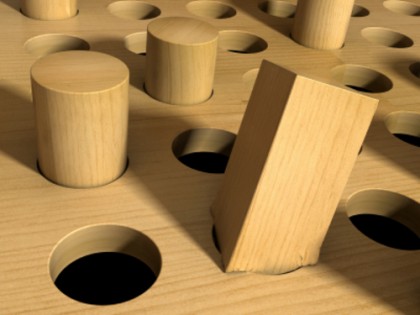 Why is our culture so consumed with the idea of relevance? What is relevance, after all? Where did this idea that the church needs to be relevant in today’s culture come from, anyway?

I suppose the idea originated as a reaction to being irrelevant in our culture, something the church has rapidly become in recent decades. As a knee-jerk reaction (if that’s possible over decades), much of the energy of the modern church has been to say we need to make ourselves relevant to people’s lives. We must change our tactics so that we look appealing to modern Americans.

In a case-by-case basis, this may make sense for some churches. Maybe the way different churches were reaching out needed to change to accomodate an ever-changing demographic of people. This is something that the church and good missionaries have always done. Paul tells us that he became “all things to all people” to win different people to Christ.

But what was Paul talking about? Did he mean that his message changed? Did Paul alter what he said to fit the different cultural trends he faced as he travelled around the ancient Greek & Roman world? The answer is most likely yes. We know from Acts 17 that in Athens Paul appealed to the Athenians’ alter of an unknown god to explain who the One True God is. We know Paul tailored his gospel presentation to fit certain crowds, but we also know one thing never changed.

The gospel message. It always starts with a problem. A sin problem. The Good News (what the word gospel means) is not really all that good news without the bad news first.

“Oh, God’s decided to save me? I didn’t know I was lost!” That’s why the concept of our desperate need for salvation is so important. How can we understand the magnitude of what God has done for us if we don’t know the depth of our great need? That’s why the good news always begins with some bad news.

But that’s not “relevant” today. That sounds a lot like the “hell, fire and brimstone” teaching of a generation ago that got us into this whole irrelevant mess we’re in now anyway.  “We’ve got to make the gospel more palatable for people to latch on to,” the thinking seems to go nowadays.

The only problem with that is that even a very haphazard reading of Acts would quickly turn that thinking on its head. The first converts were won over to Christianity with the statement, “Repent and be baptized, every one of you, in the name of Jesus Christ for the forgiveness of your sins. And you will receive the gift of the Holy Spirit.”

Peter had just spent a little time giving a large crowd the bad news. They had rejected God. They had crucified their salvation. They were responsible for their own eternal destiny. The good news Peter gave that day wasn’t that God loved them, even though that is very true. The good news he gave them was that there was a way to forgiveness; there was a way to be right with God.

What we see happening in Acts is powerful. Peter didn’t threaten them and he didn’t try to scare them. No “hell, fire and brimstone” came from his mouth. What he did do was give them the truth. They were in trouble and they needed to repent of their sins and accept Jesus to get out of it. And that powerful statement led to tens of thousands over the next several years coming to know the Lord.

Peter’s statements today would be seen as the most irrelevant thing a person could say. No one today wants to hear about their great need, they want to hear about God’s love for them. They want to know how much God likes them. The sad thing is that we can say all those things and they’d be 100% true but they would still lead a person to spend eternity separated from God. They need to know that God can forgive their sins; their wickedness. When a person accepts that they are wicked before God and that only He can wipe away their sins and make them right before Him; that’s where there is power.

And that’s what makes the church relevant: power. Paul says it plainly when speaking of the apostles:

9 For, I think, God has exhibited us apostles last of all, as men condemned to death; because we have become a spectacle to the world, both to angels and to men.10 We are fools for Christ’s sake, but you are prudent in Christ; we are weak, but you are strong; you are distinguished, but we are without honor.11 To this present hour we are both hungry and thirsty, and are poorly clothed, and are roughly treated, and are homeless;12 and we toil, working with our own hands; when we are reviled, we bless; when we are persecuted, we endure;13 when we are slandered, we try to conciliate; we have become as the scum of the world, the dregs of all things, even until now. 1 Corinthians 4:9-13

That doesn’t sound very relevant to me. That sounds the opposite of trying to be relevant. And by the guy who advocated being relevant to those he preached the gospel to, no less! So what made Paul so effective? What made all the rest of these “scum of the earth” apostles so effective?

What We Really Need

Power. God healed. He spoke. He killed people who lied in the midst of the believers. He released people from prison. He answered prayers-specific prayers. He changed lives before everyone’s eyes.

The problem with the church in our day and age is not necessarily that our message is off, but that we lack power. We lack the branding of the Holy Spirit that He so willingly gave to those in the early church. How often do we see lives changed?

So instead of trying to change our message and have cool lights and fog machines; maybe we should be spending our energy asking God to show us what it will take to get that kind of transformative power on our congregations today.

Will you ask God to transform you and your church today?