Where Is Your Hope? 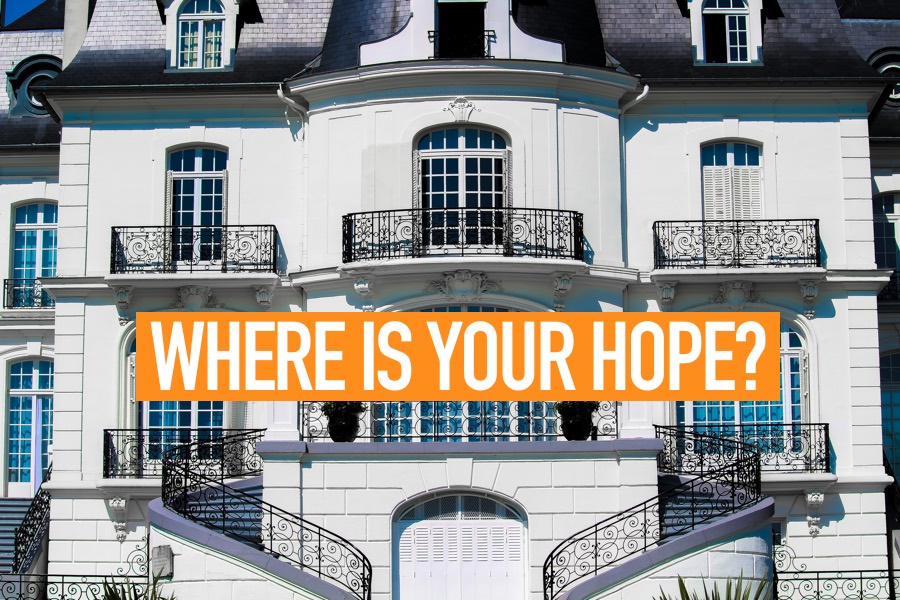 Over the past several years I’ve had to write a lot about some not-so-inspiring things. I haven’t written them because I’m a downer of a person, but because I genuinely believe that the Lord had me share them. We live in a very tumultuous time, and I feel the Lord has given me some sobering words for believers and our nation.

I wrote a book in 2013 about two dreams the Lord gave me. In the first dream, the Lord showed me the collapse of the twin towers two days before it happened, on September 9, 2001. In the second dream, He showed me the building that would replace it and He spoke to me “That building will be a sign and seal of My judgment against America” because of the church’s unfaithfulness in revealing God’s glory over nationalism.

Then I shared earlier this fall that I feel like the Lord showed me in a dream in 2011 that Hillary would become president. That set off a firestorm of hope-shaming.

I was thinking this morning about a lot of conversations I’ve had with people in the past several years about hope. Many people have asked me “where is the hope” in what I share? Some have accused me of being negative and hopeless.

Though not everyone has this in mind, one of the principle reasons people believe I don’t give them hope is because they’re afraid of losing their stuff. Their retirement. Their house. Their job. Their comfort. Their church. Their way of life. Their peace. Their idea of what America should look like.

If those things are what I take away their hope in, I plead guilty.

In America today, we have become very dependent on our stuff. From poor people hooked on government cheese to rich people offended that they should have to pay for roads, we are an entitled nation top to bottom. We all just want our stuff, it’s just that our stuff may be different from someone else’s.

Don’t get me wrong, I like stuff. I like all my stuff a lot. And God likes stuff, too. Just look at all His accounts of how beautiful eternity will be. Read the end of Revelation and you will agree that God likes stuff. He even likes to give us stuff in this life, too. He really does like stuff a lot. That’s good news!

What He doesn’t like is for people to like stuff more than Him. The Bible calls Him a jealous God. It’s not talking about some silly jealousy over someone having something we don’t. It means that He hates it when we put anything else ahead of Him. He doesn’t hate it because He’s so needy for our affection, but because He knows that everything that we put ahead of Him in our list of priorities will lead us into sin. Everything, every time.

When God’s jealousy for our affection is aroused, He will do everything in His power, from gentle to harsh, to remove it so that our relationship with Him can be restored. And if our stuff gets in the way of that relationship, He will hate that stuff. He will remove our hope in that stuff.

I have hope in the Lord, and Him alone. Every time that becomes less than true, I feel the gentle tug of the Lord in my heart. Sometimes I resist that gentle tug and I harden my heart to Him. That’s when I feel the gentle stirring of trouble in my life. Sometimes I’ve resisted that as well. That’s when things get really tough and I am almost forced to turn my heart back to the Lord in the thing I knew He was saying to begin with.

So where is our hope? If we can’t hope in our stuff, what can we hope in?

In all my conversations with people, when they’ve asked me candidly this question, I tell them the same thing.

Our sins are forgiven.

That is my hope, that is all I have to hope in. When I put my hope in anything else, it leads me astray. My hope is in the Lord because He has forgiven my many sins. When I contemplate that, my entitlement mentality melts away.

When I think about the cross of Jesus and His shed blood for my sins, my money makes a little less sense. When I wonder at the mystery of God’s reconciliation of me to Him, I don’t seem to want a bigger house or a better car as much.

In fact, when I begin to force my life to revolve around the fact that God has forgiven my sins and reconciled me to Him, I don’t seem to need much at all. In fact, all I start to want is Him, and I’ll take Him in any circumstances.

Evaluate Where Your Hope Is

As we approach this election season, let me assure you that I have just as much apprehension and grief as any of you. As I see the direction this nation is headed, I lose heart at this great system that was established over 230 years ago. It makes me sad, and it makes the Lord sad, but I truly believe He will shake everything that can be shaken until only the good things in our lives remain.

Think of an apple tree full of rotten fruit. If you shake it hard enough, the rotten fruit will fall off. Even some of the good fruit will fall too, but in the end, only good fruit will remain. I believe the Lord is shaking our nation, and will continue to shake it until His people trust in Him alone. It won’t be fun to be that apple tree during the shaking, but we will all thank the Father for His leadership when it is over.

If that leaves you with no hope, then let me offer an alternative hope for you.

Your sins are forgiven.